Camino Portuguese Day 8 was going to be Tui to Mos … but we ended up catching a train in Porriño instead! 🙂

The day started off well enough. We spent the night in a very basic and not terribly well designed (hello, group showers) albergue. The greatest asset to the hostel was its location – right behind the cathedral, which positioned it well for starting the next day. It was also only 5 euros each for the night’s accommodation.

We were up well before dawn. Once we crossed the border into Spain we also switched time zones. This means sunrise is at 9 am. This means that if you get up at 7 and start at 8 like we did, it looks a lot more like 6 am. The streets were empty and it was really dark. Fortunately, a few coffee shops were open, so we got our espresso jump-start and off we headed.

We got lost. Tui is lacking arrows that are visible in the darkness. After a few wrong turns, the help of google maps, and directions from locals (thankfully Augusto was still with us, so not only could he ask for direction, but unlike me, he could actually understand the reply) we found the track. 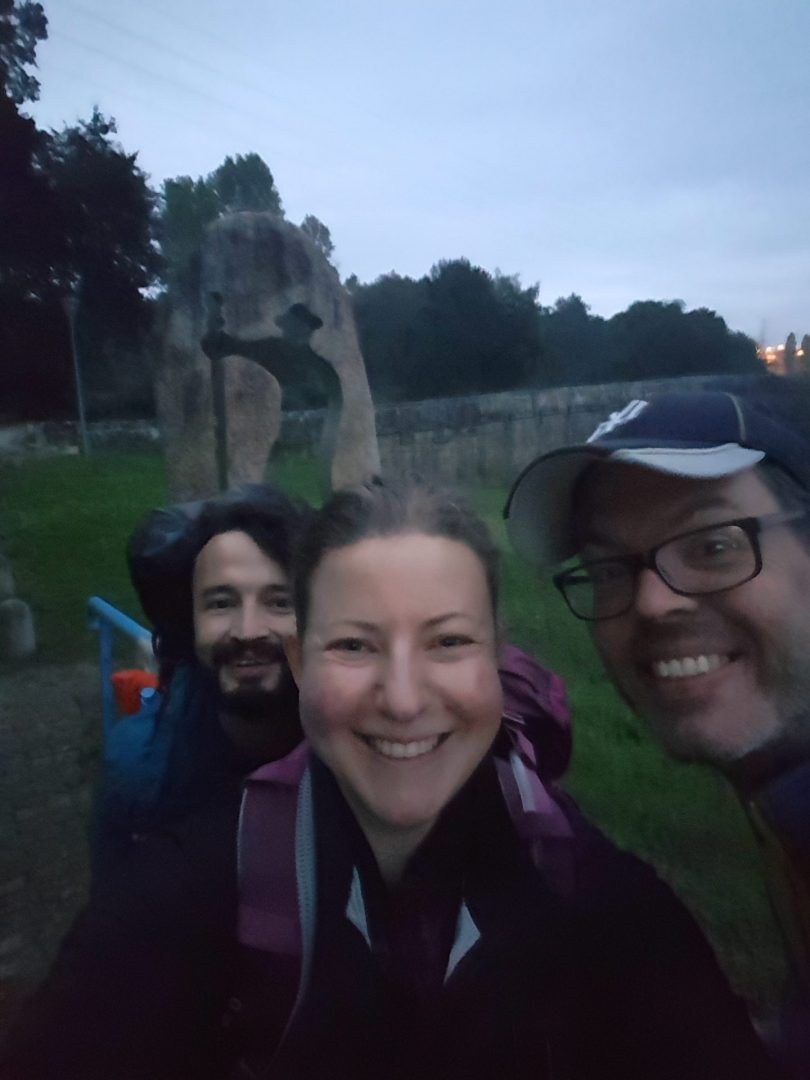 Augusto Amanda and Dave as we leave Tui. Almost sunrise! About 9am. 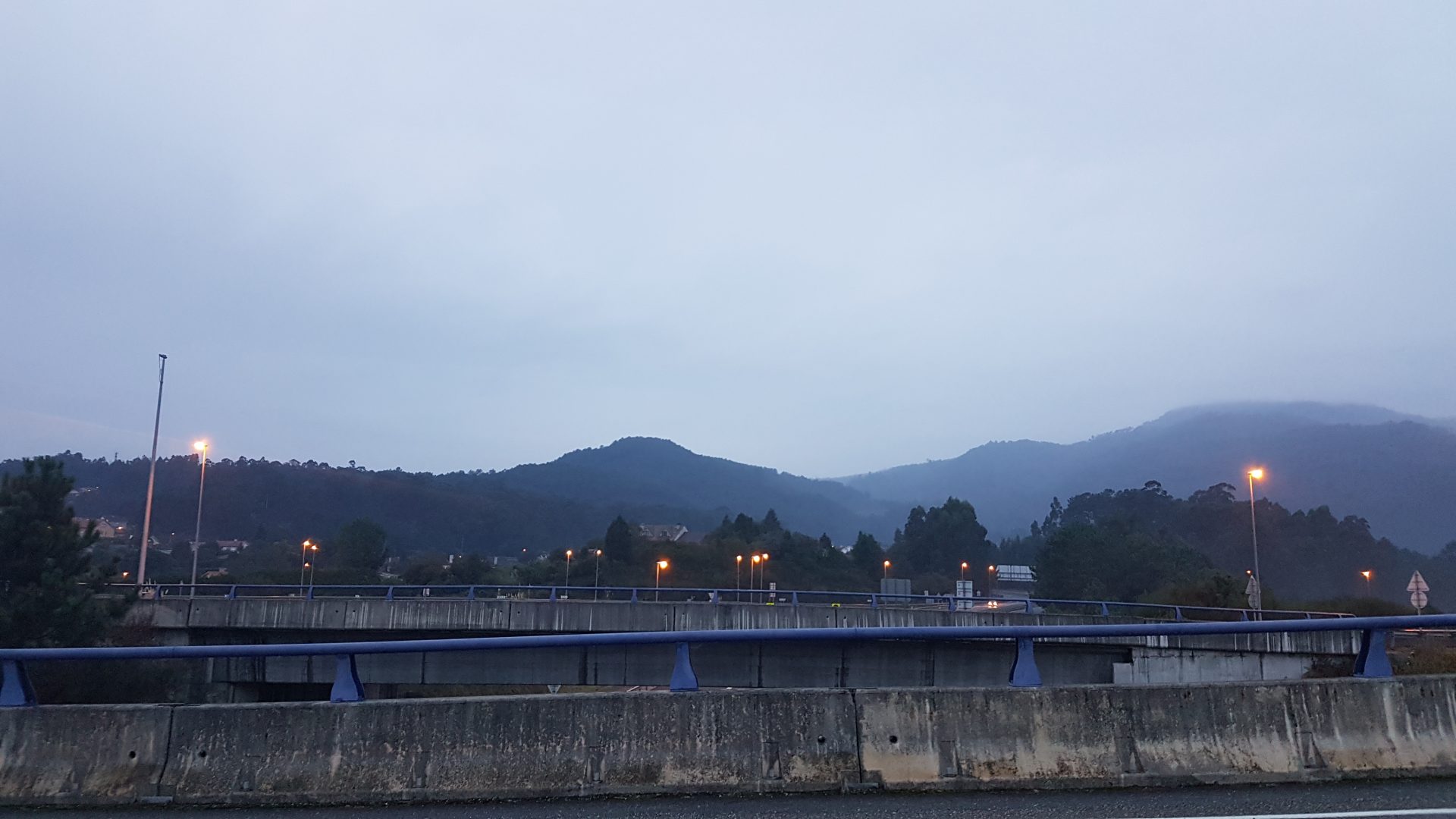 Following the A-9 out of Tui – this was about 9am – almost sunrise! 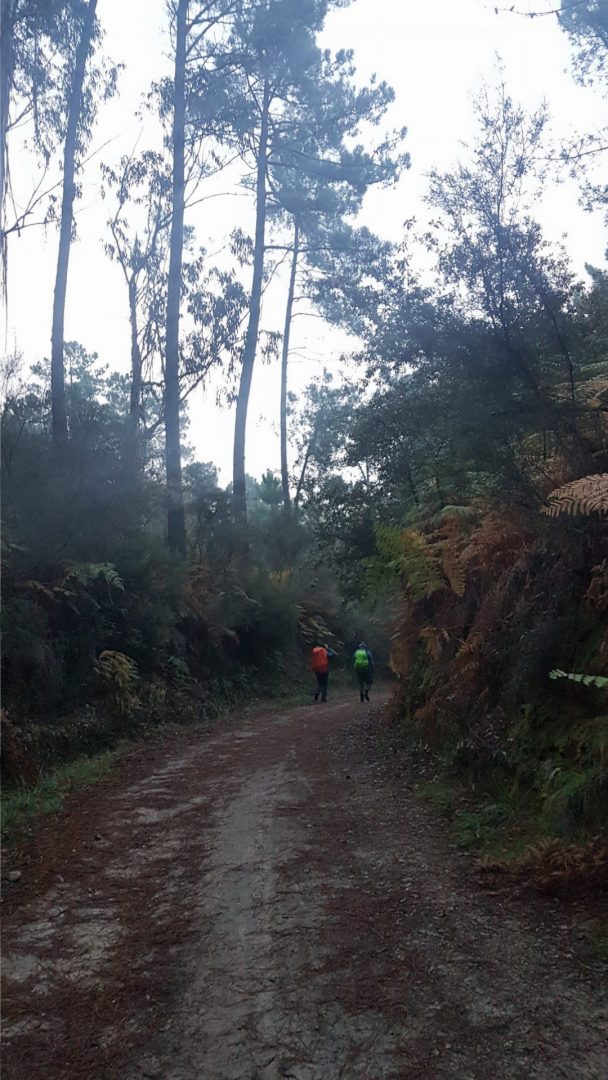 Dave and Augusto, just past Capela da Virxe do Camino. 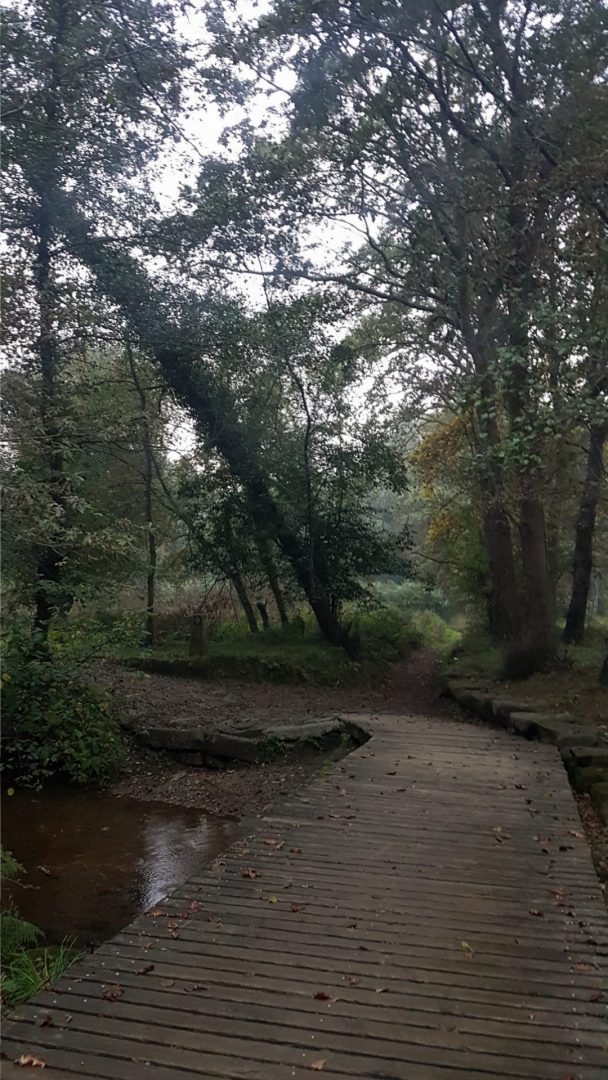 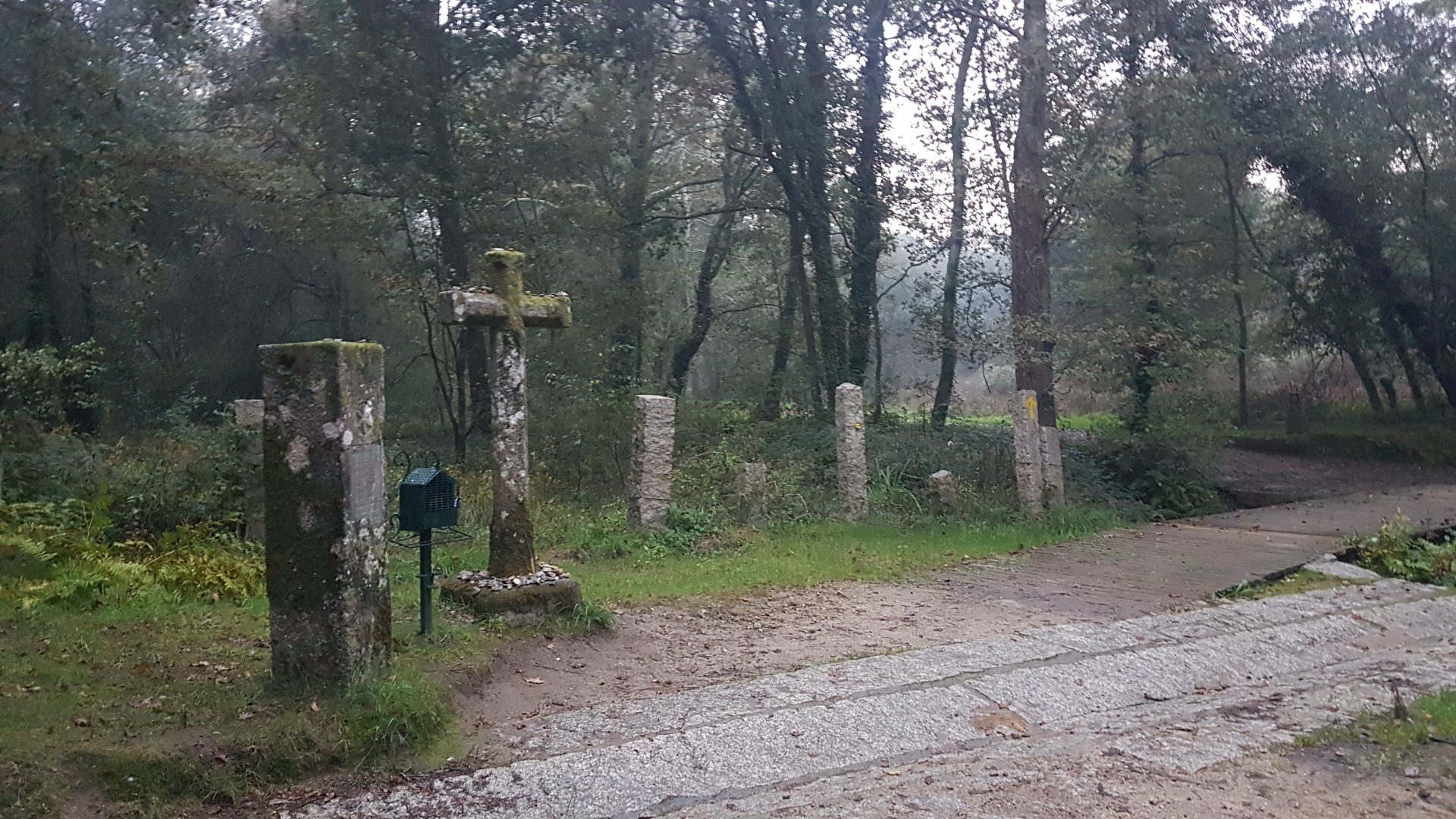 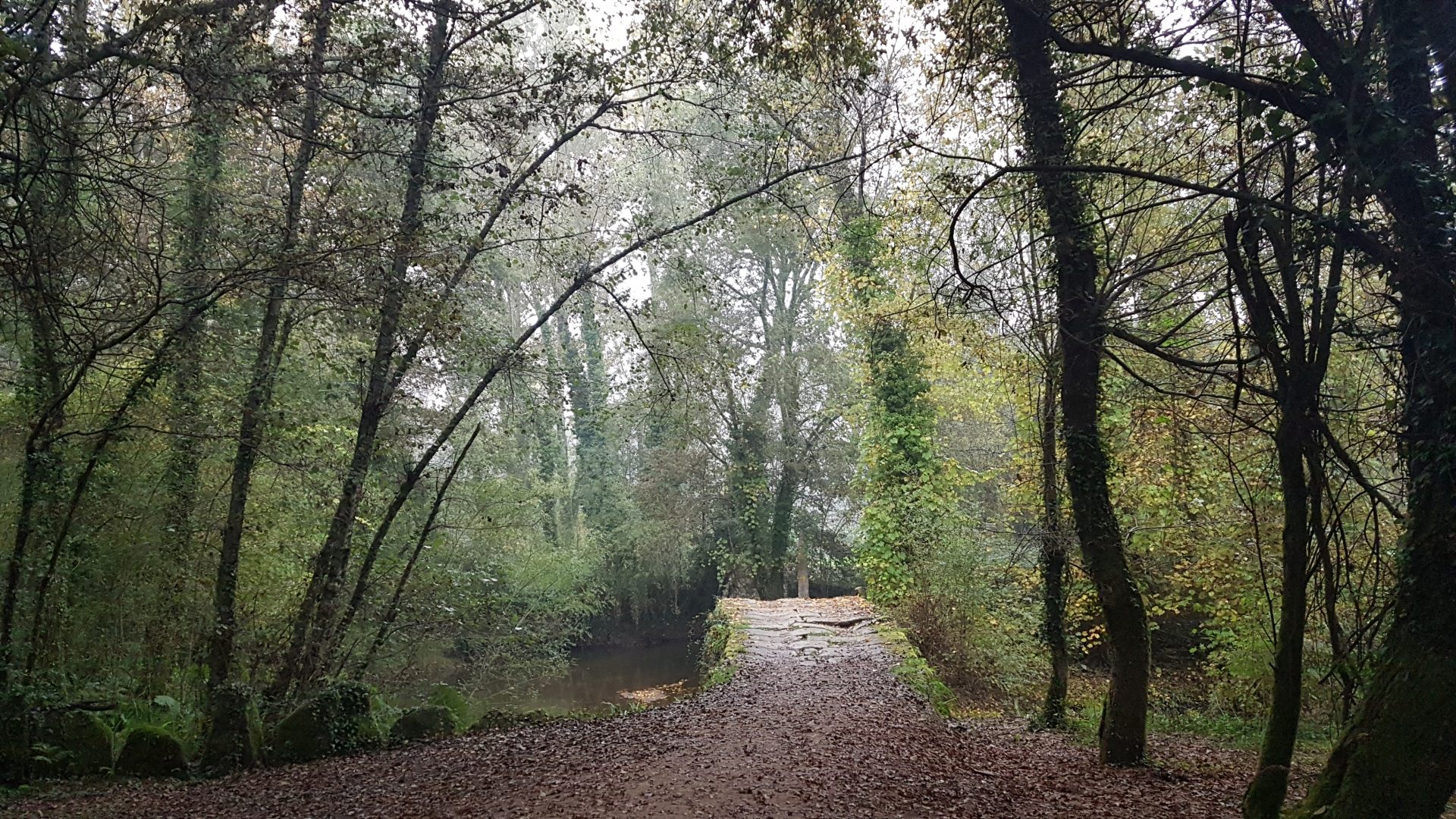 Light rain added to the ethereal feel of the trail walk this morning. 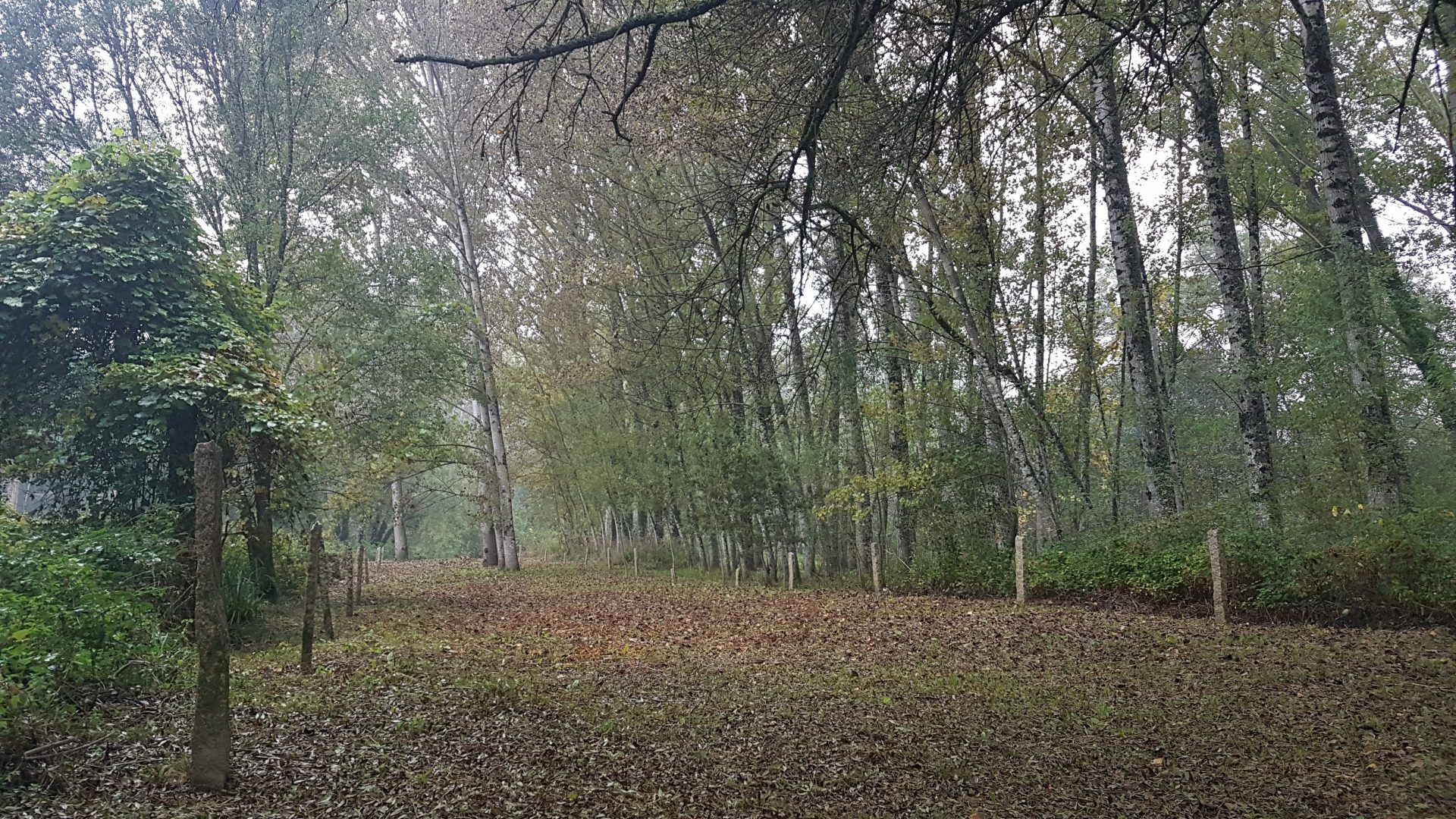 I was very happy with the trail this morning – soft underfoot, very forgiving on weary ankle joints.

The lovely trail walk ended abruptly around Opción. There was an alternative path through woodlands that extended the walk by 1km. At that point, we were intending to walk the 22km to Mos, and we decided to keep the day as short as possible to save our feet. Unfortunately, this meant a hard slog through an industrial/warehouse area, in the rain, and it turned out unforgiving walking surfaces.

By the time we reached Porriño we were a bit over it. We were wet, sore, and the forecast for the next day was looking even more miserable (thunder/lighting very very frightening). Dave’s blisters have taken over most of his foot, and some of them even have blisters of their own. We decided that the next day would be a rest day, and we would aim to get to Pontevedra by any means other than walking, skipping approx 36km of trail. 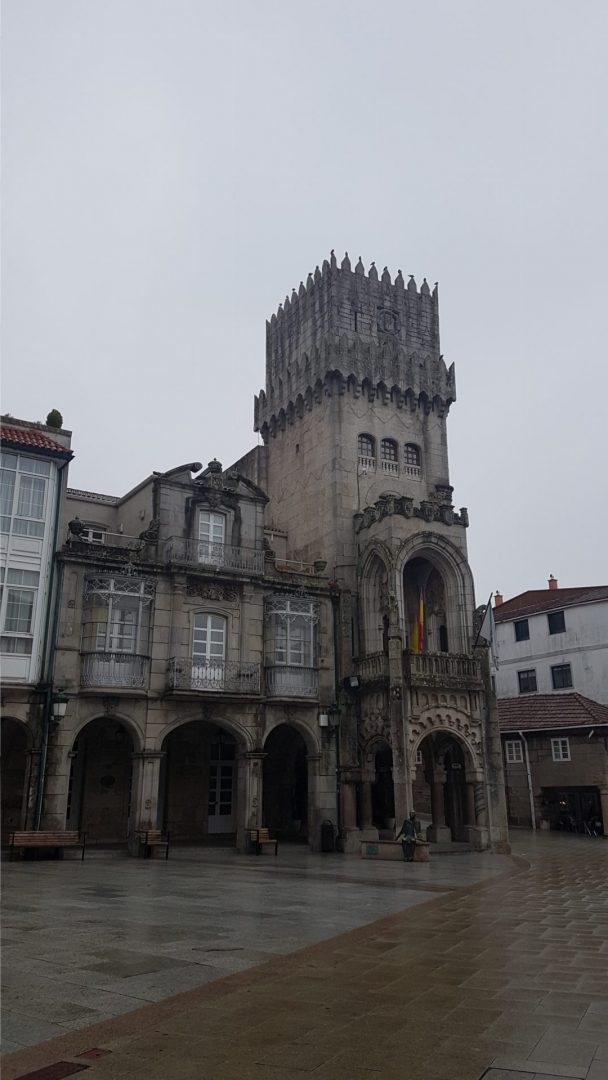 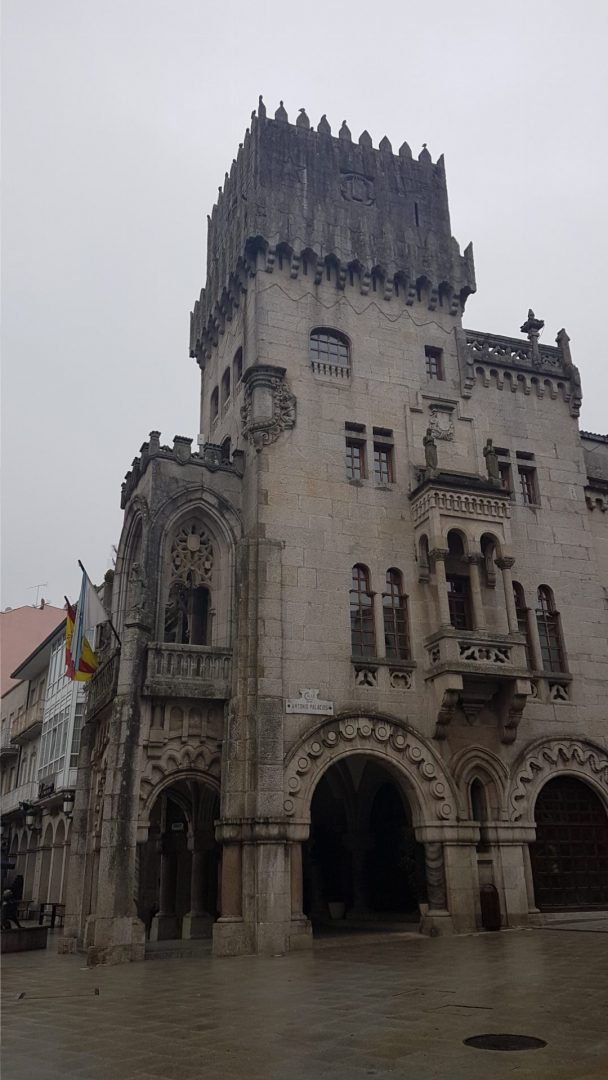 Porriño is a bit unique on the trail, as it has a train station. I’ve seen others get taxis to make up for lost time. A few tough days can put your schedule way out, which can muck you up a bit if you’ve already booked flights etc. We got quite lucky in Porriño. After inspecting the train time-table, we discovered that one of the very few trains for the day left in 45 minutes for Vigo. Vigo is not on the Camino trail, but it is a major interchange and we figured we could then get a train or bus to Pontevedra.

Another stroke of luck occurred upon reaching Vigo (a very large commercial port town – shipping container central) – there was a train headed to Pontevedra in 30 minutes! We weren’t the only pilgrims on the train either. One chap (he’d stayed in the same albergue as us the night before) had managed to walk from Tui to Redondela, 33km over some reasonable hills, in time for the train to Pontevedra at 3pm. 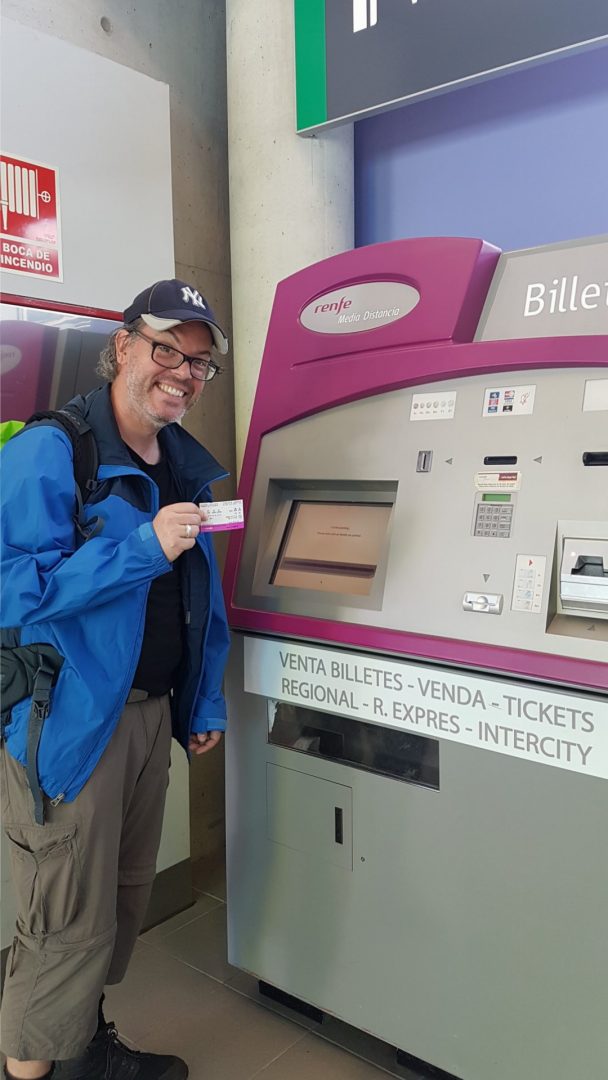 We happily arrived on the outskirts of Pontevedra via Renfe. 🙂

Pontevedra is an old port town with some rather beautiful buildings (it was the capital of Galicia for a while) and some fantastic cafes and bars. Our first stop for the evening, after finding accommodation, was a bar in the central cathedral area. Rookie error as the drinks cost x3 more than everywhere else, but it was a nice spot to sit for a bit and watch the citizens of Pontevedra go about their Saturday afternoon. 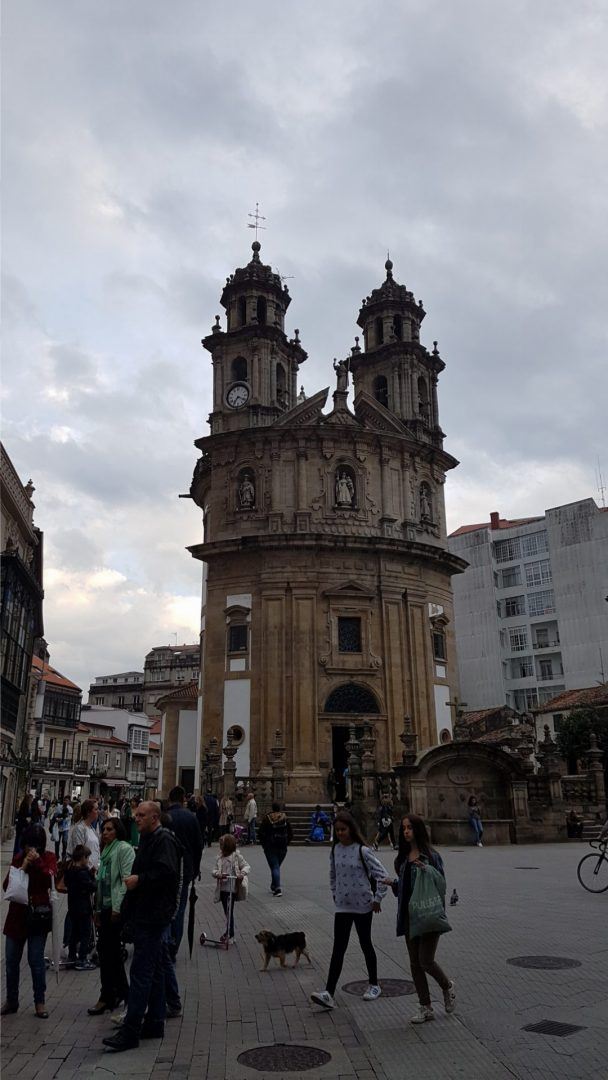 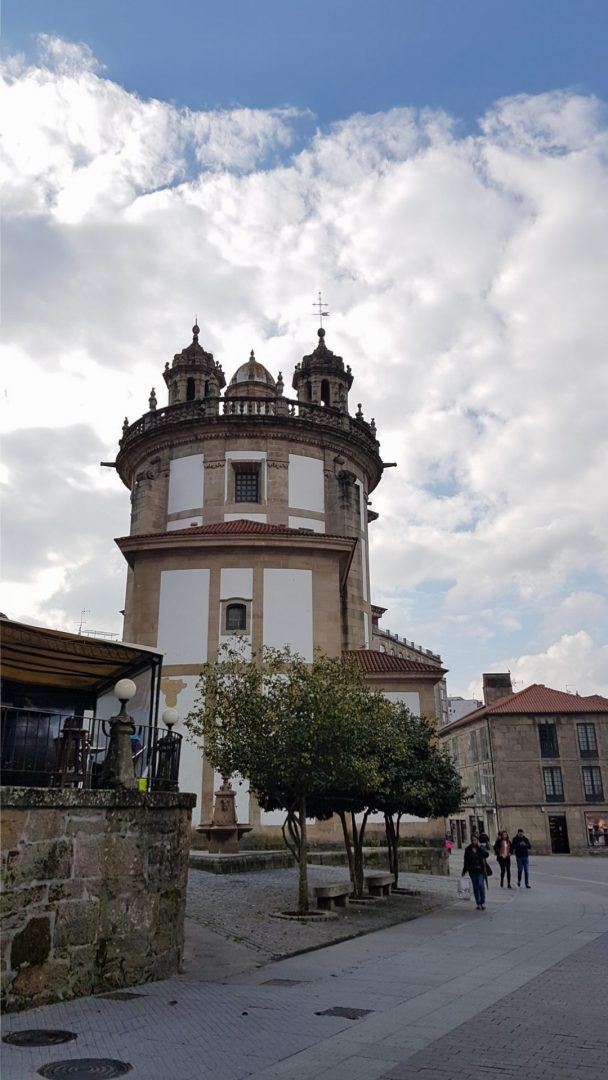 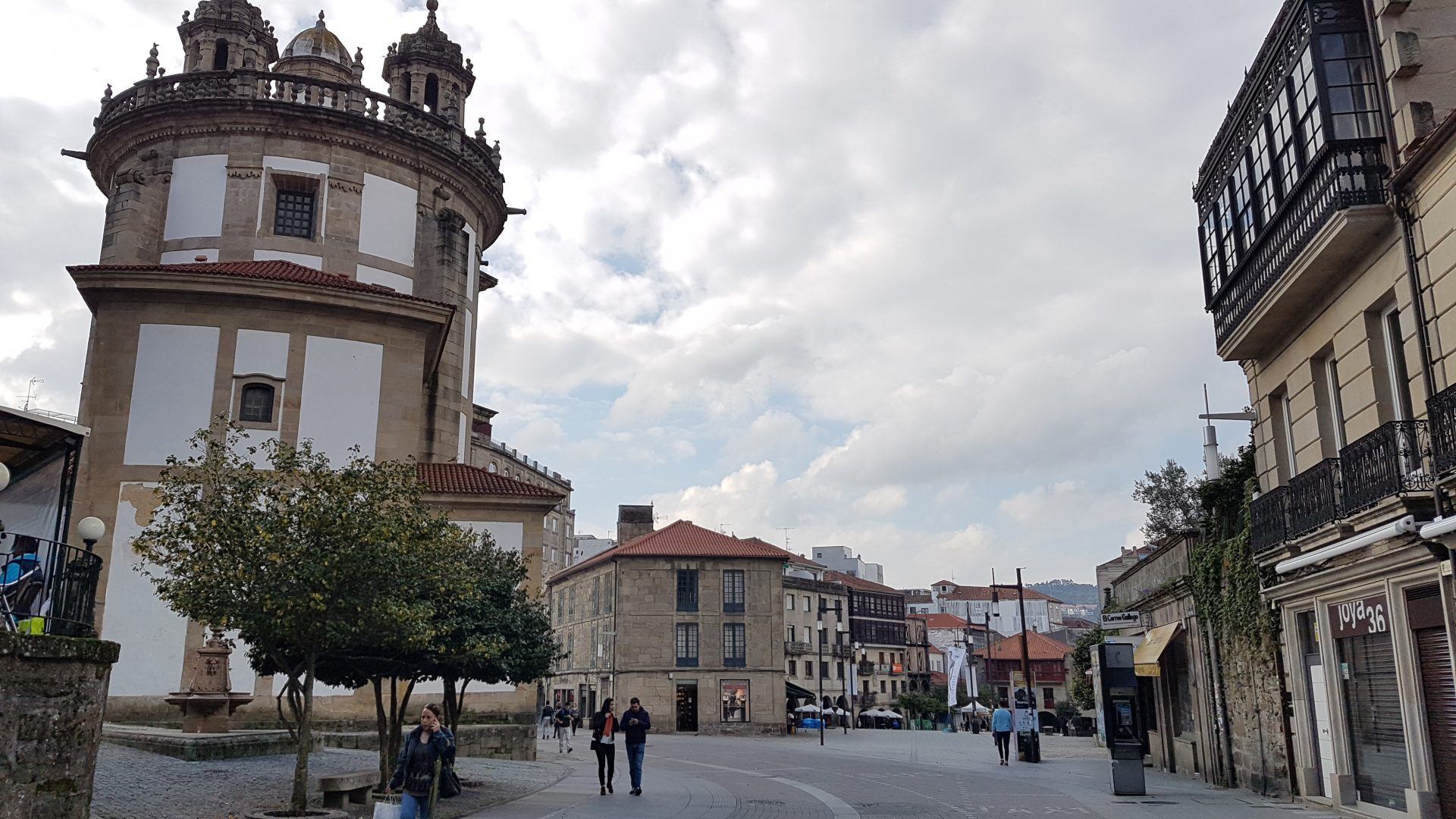 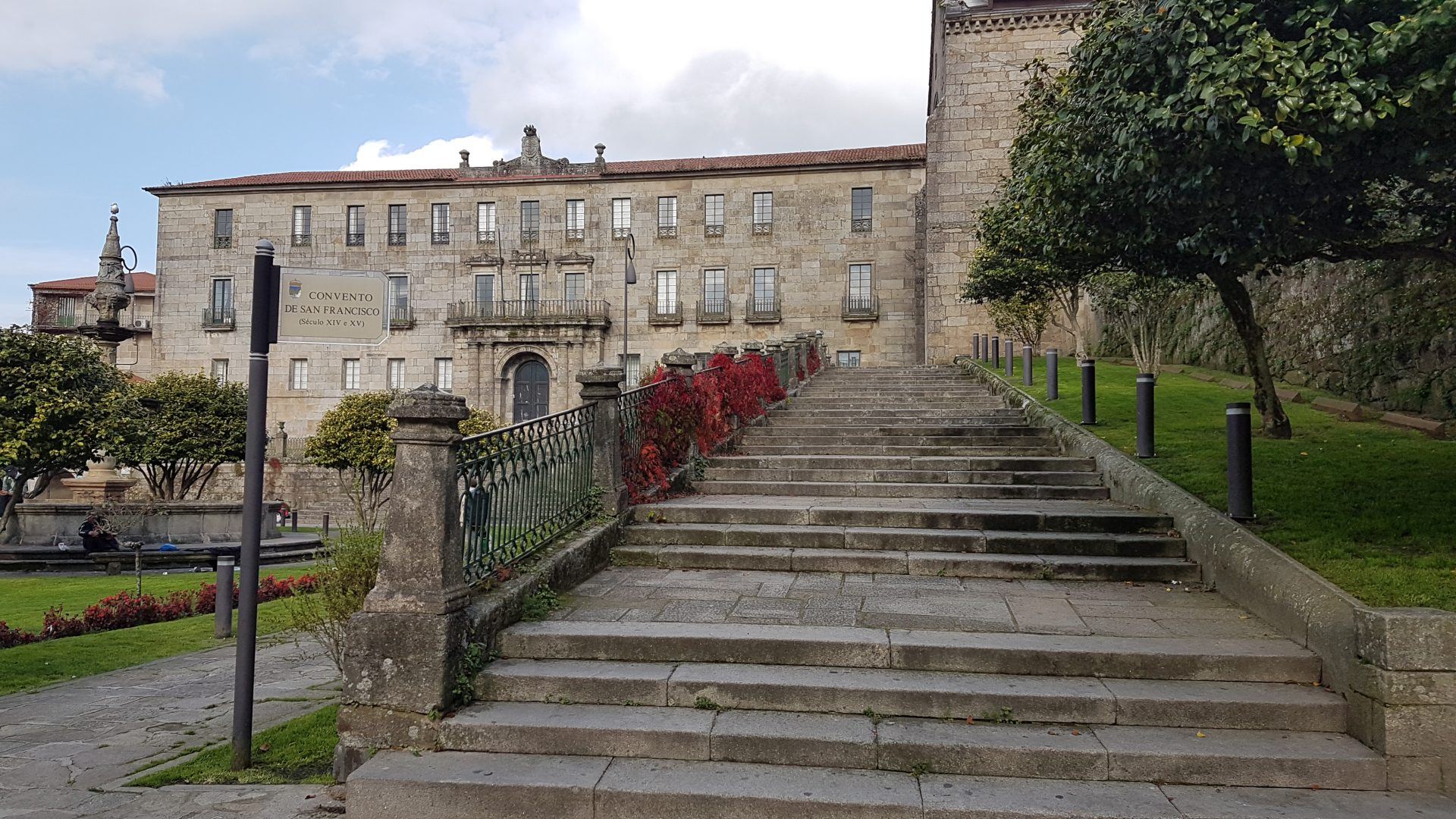 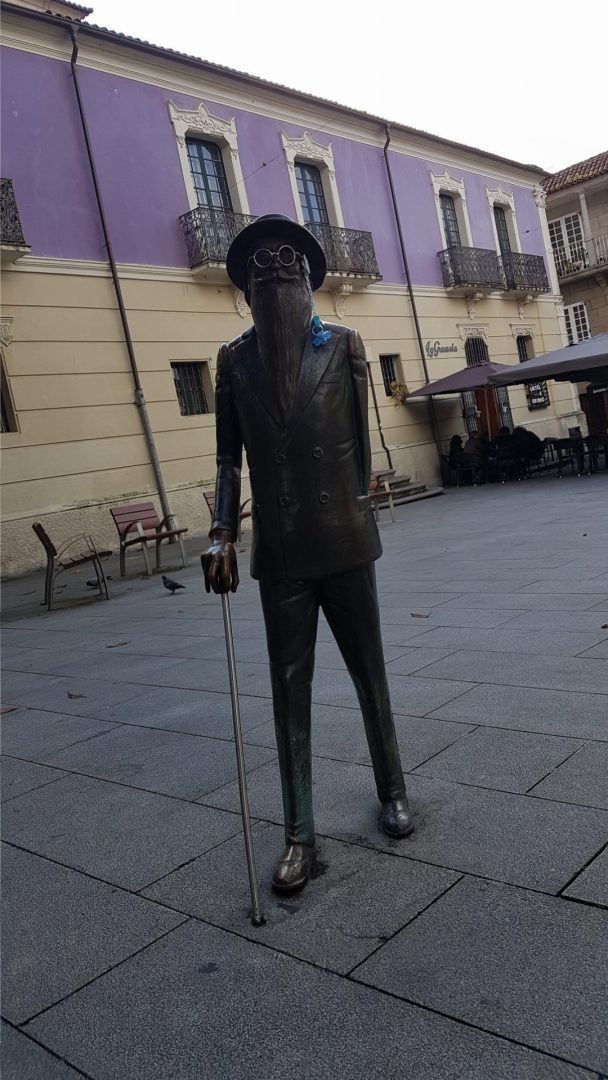 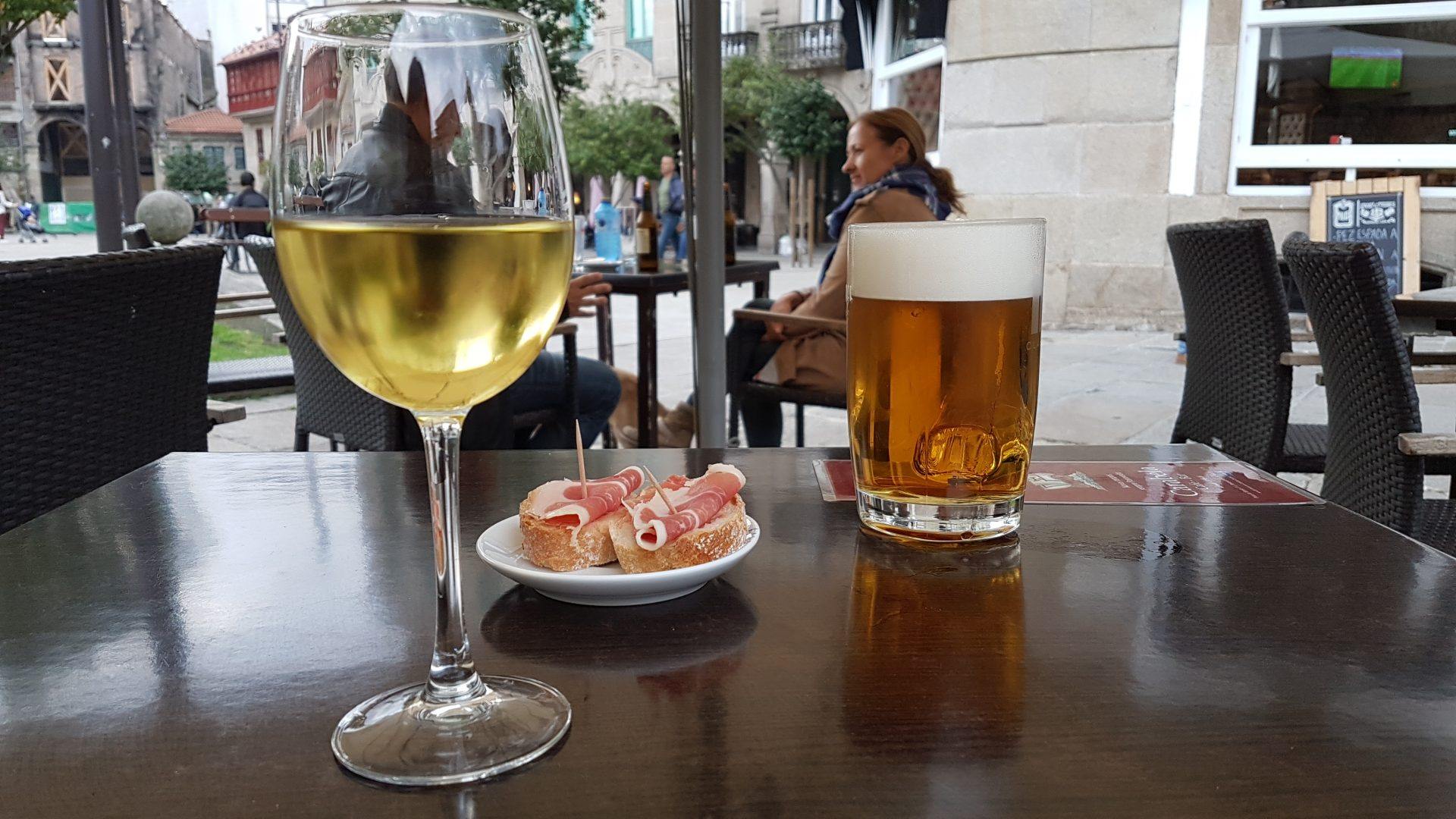 Afternoon tea – all drink orders come with some small food item, whether you order alcohol or coffee. These were bread with garlic/tomato sugo and very tasty prosciutto.

We explored the city further, discovering a little Pintxos bar

These guys do the best sangria. 🙂 I was hoping for something without bread for dinner but … turns out all the little pintxos come on bread or toast. They were all very tasty. Dave’s been craving a ham and cheese toastie for a few days now, and he pretty much got the Spanish equivalent at Pintxo Vino. 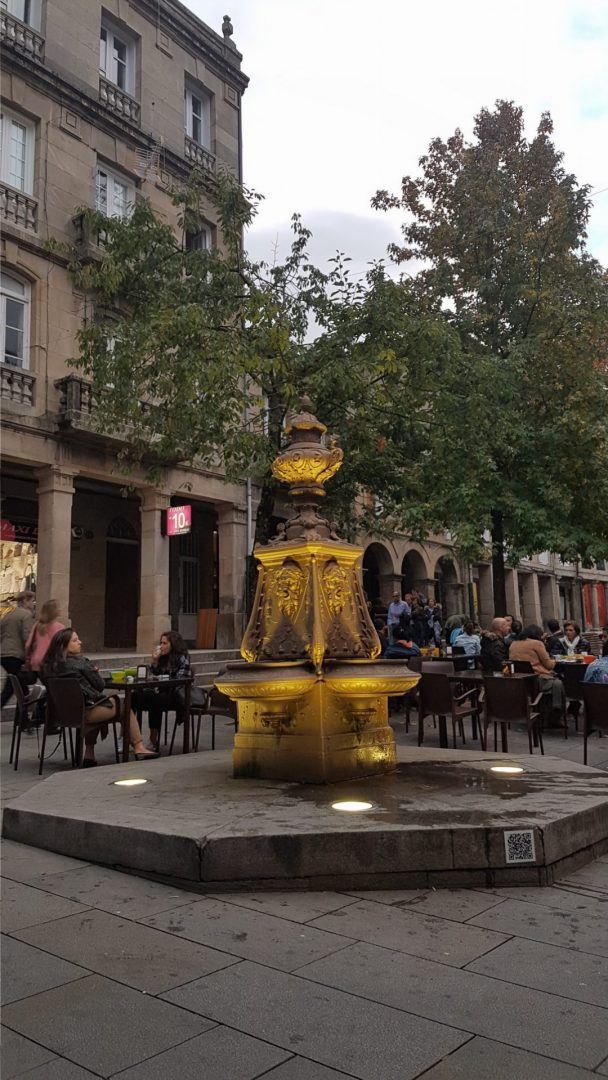 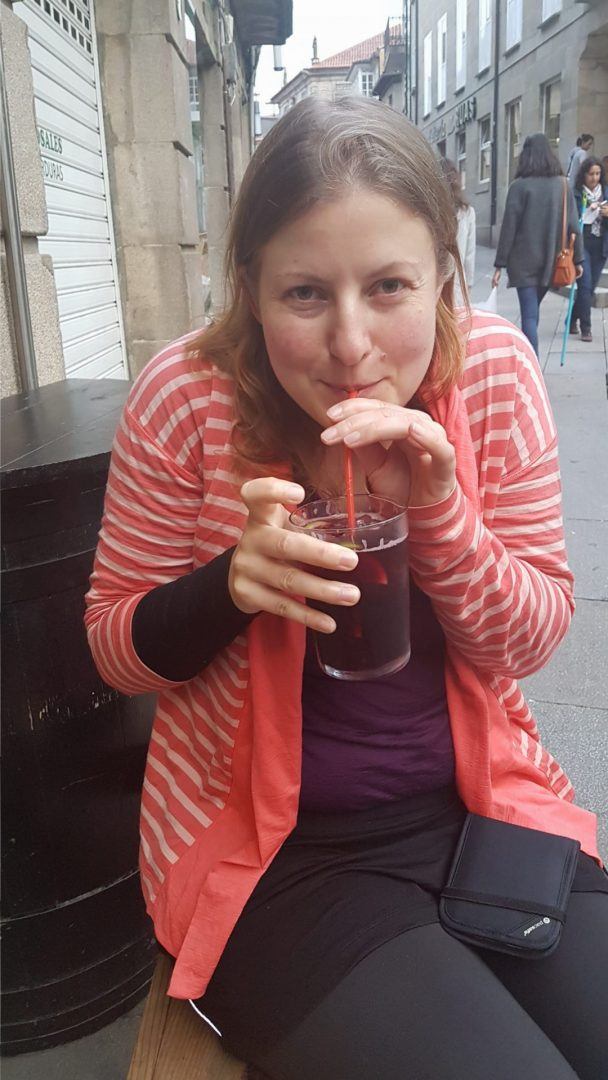 Amanda in Sangria heaven. This was very very good sangria. 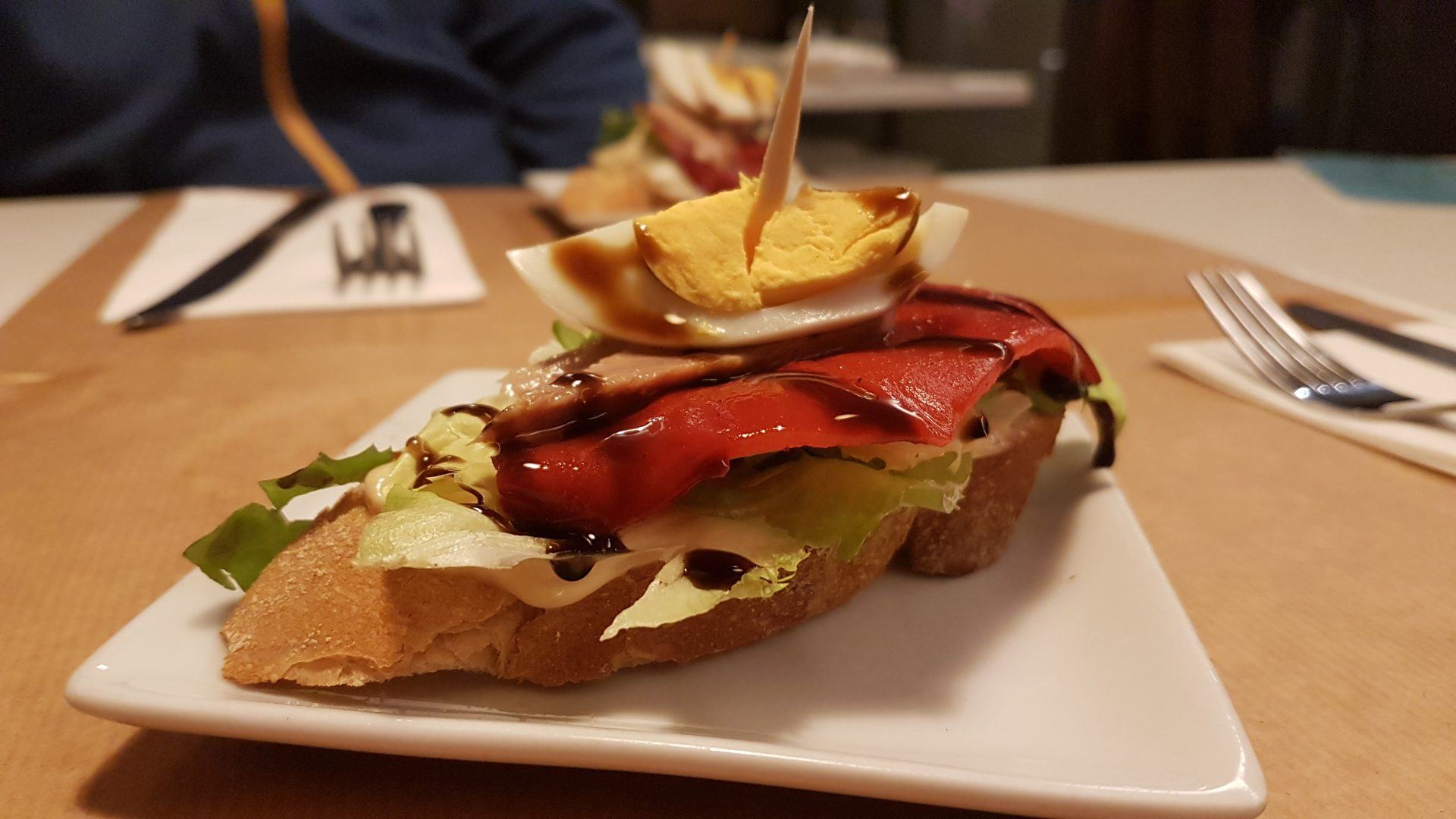 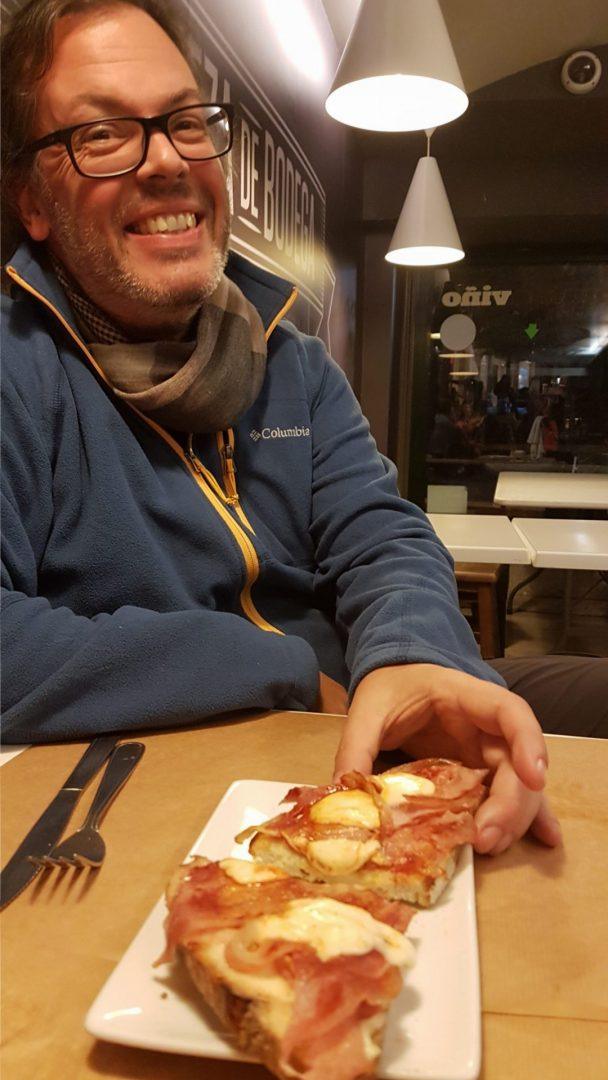 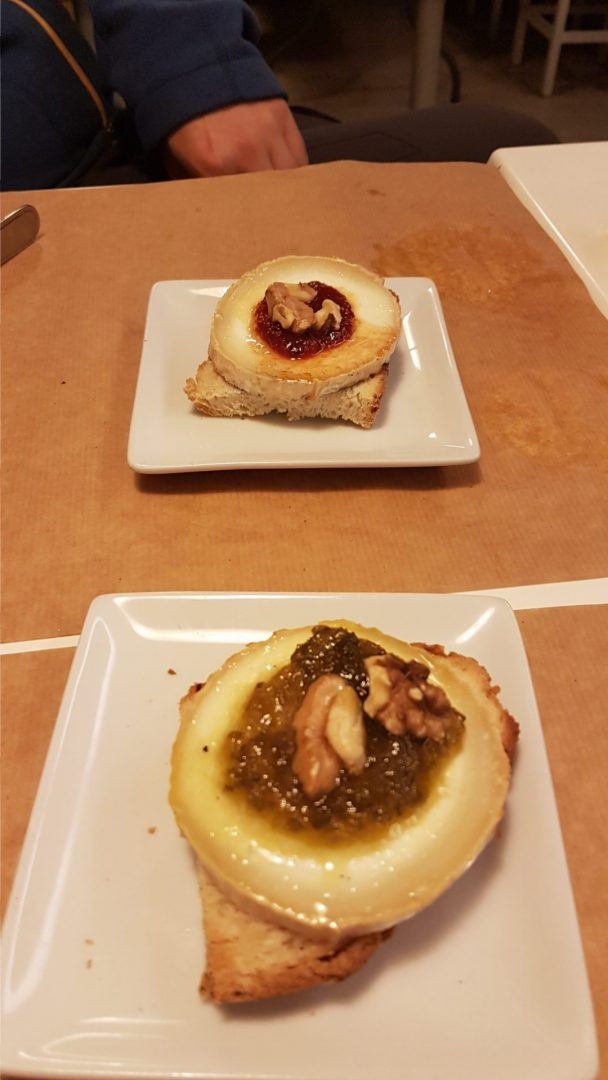