Today we had a wonderful walk through some beautiful countryside. The weather was perfect – the morning started crisp and cool and rain-free. The sun poked its head out around 11am (of course, sunrise wasn’t until 9am anyway). Dave and I were both very happy that we’d made the decision not to walk yesterday in the torrential rain. That would have sucked immensely.

The paths today were mostly dirt or gravel trails through the forest which was heaven on our feet. It’s a good thing we’re not doing the Camino Frances as Dave’s feet wouldn’t cope with much more than another couple of days. His big toe is developing a sizeable growth that may end up needing its own post-code.

There were very few cafes along the route today, and no custard filled goodies at breakfast, so Dave had to do today’s walk powered only by chocolate, coffee and cola. It was a risky venture, as we weren’t sure how he’d go without custard, but it seems he can survive on other calorie laden food stuffs as well. Good to know. 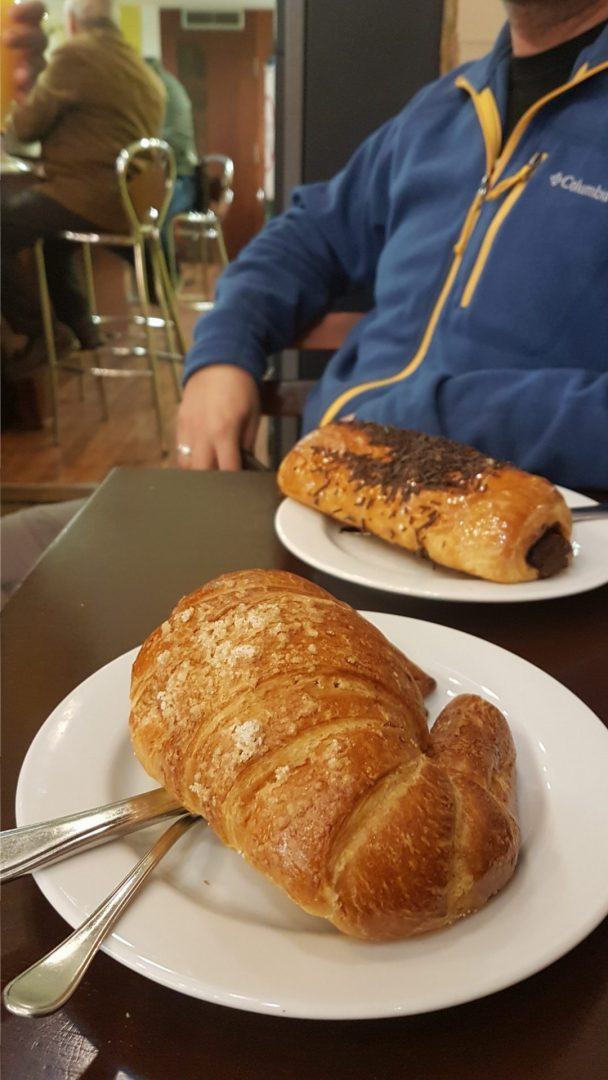 Fueled only by pastry. My croissant and Dave’s pain au chocolat.

There was much evidence on the trail of the downpours we’d seen the day before. The rain had washed away many of the stones on the trail, and there were a few areas where the water streamed across the path. I am thankful for my waterproof boots – they’ve done a stellar job these past few days keeping my feet warm and dry. 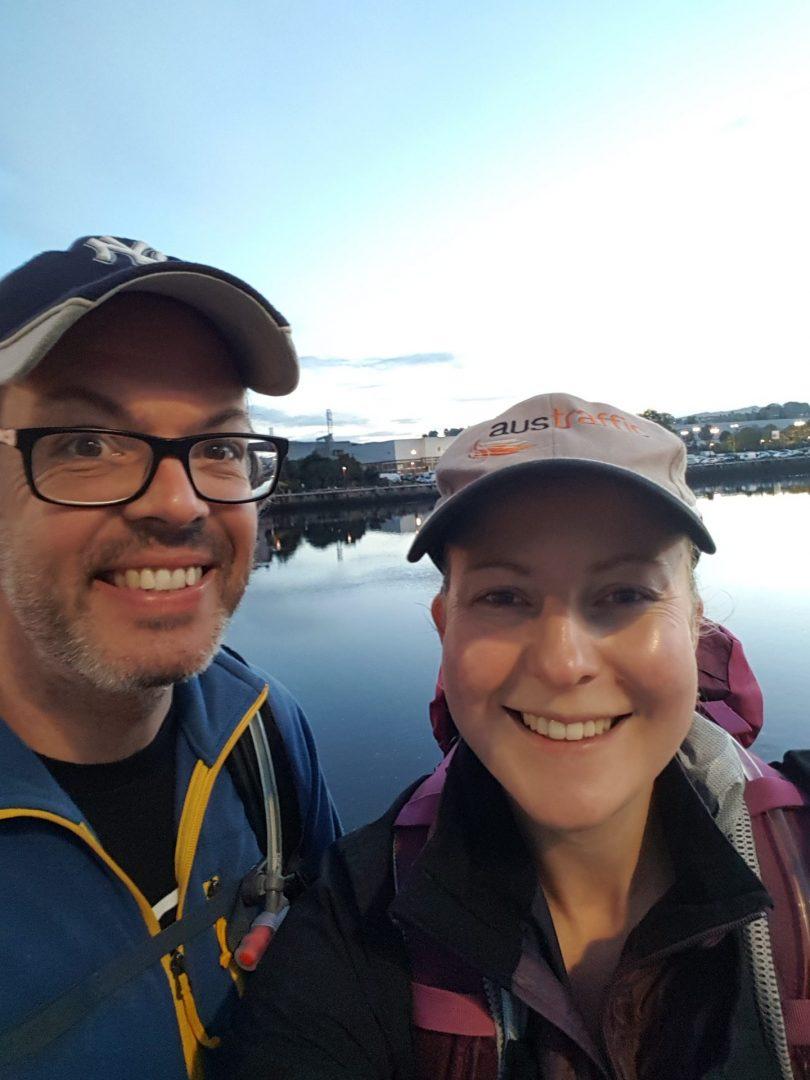 Day 10 selfie near the Pontevedre Bridge. We were up well before dawn (9) and on our way by about 8 ish. 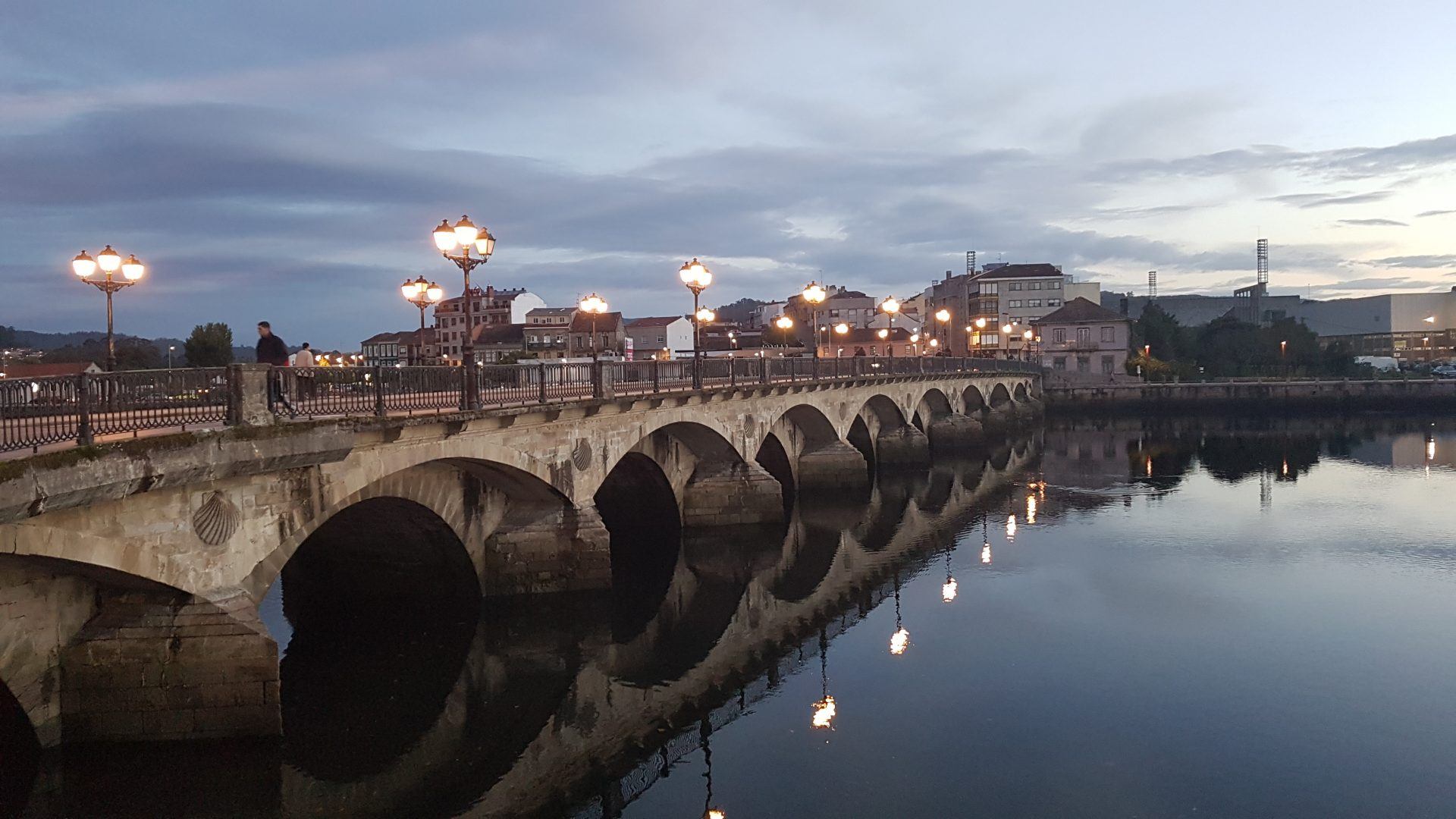 Pontevedre bridge at the crack of dawn (just before 9am) 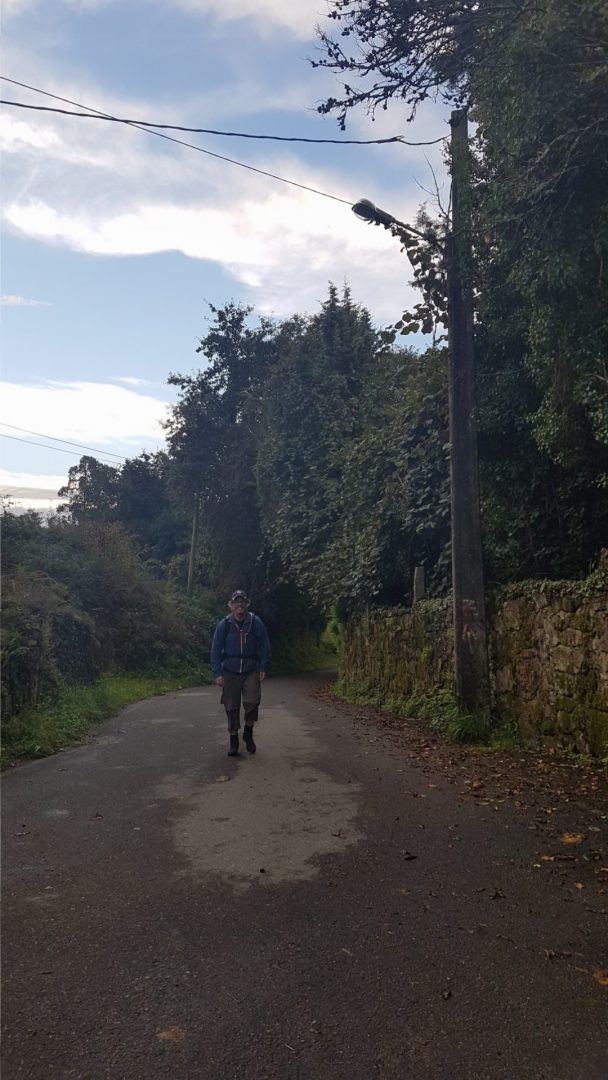 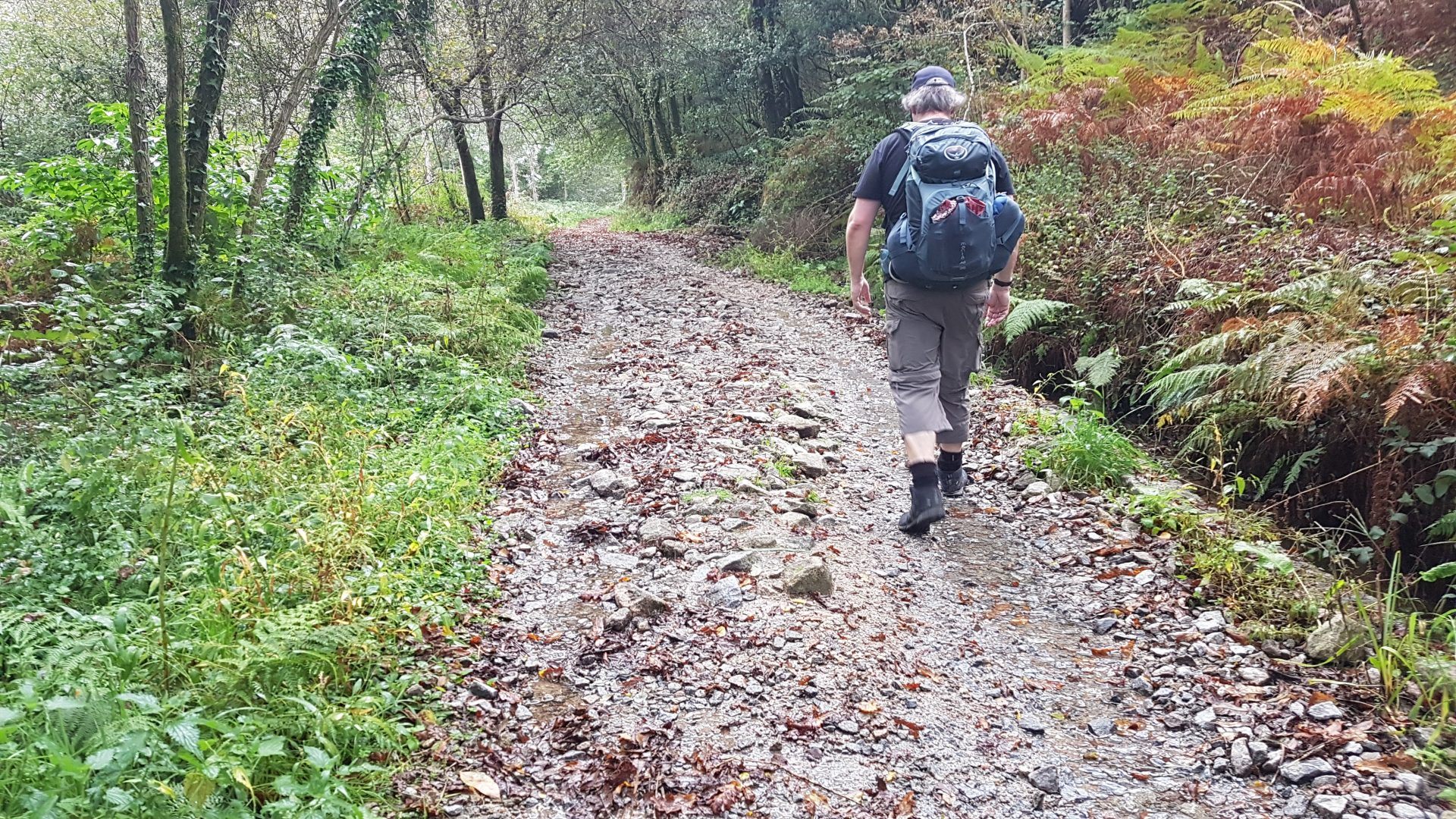 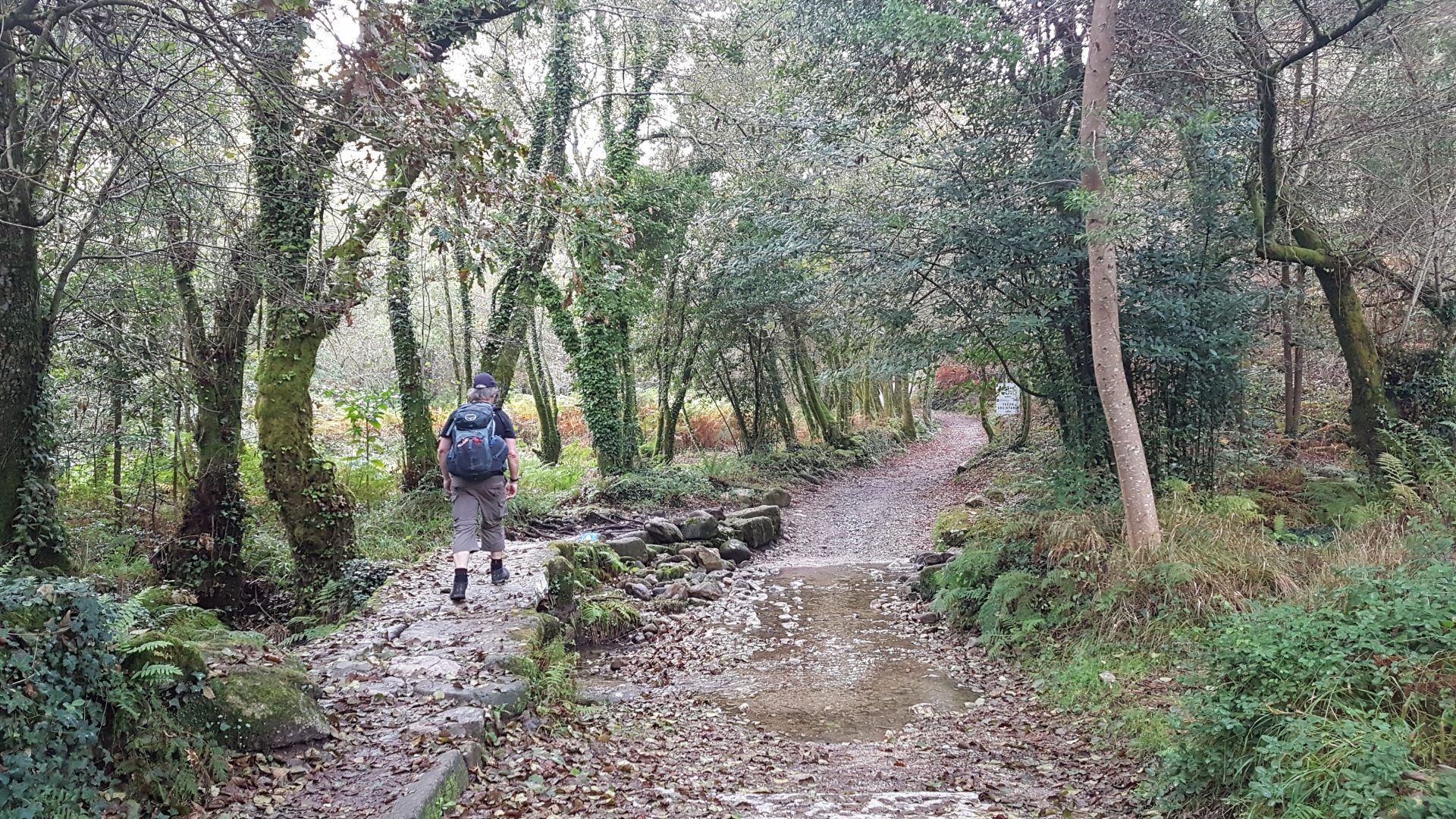 Crossing the bridge. Heavy rain the day before meant that there were quite a few wee streams crossing the path. 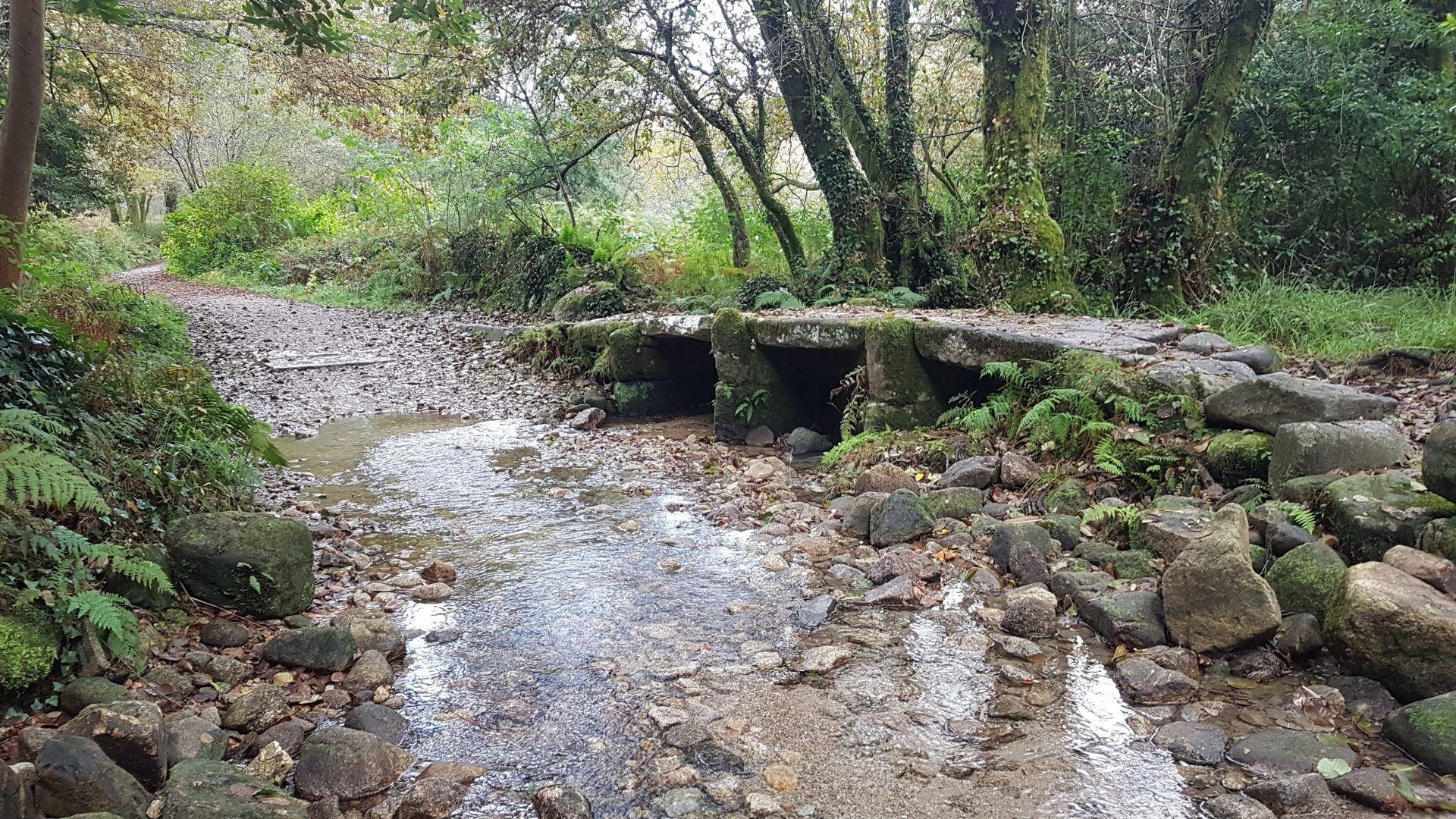 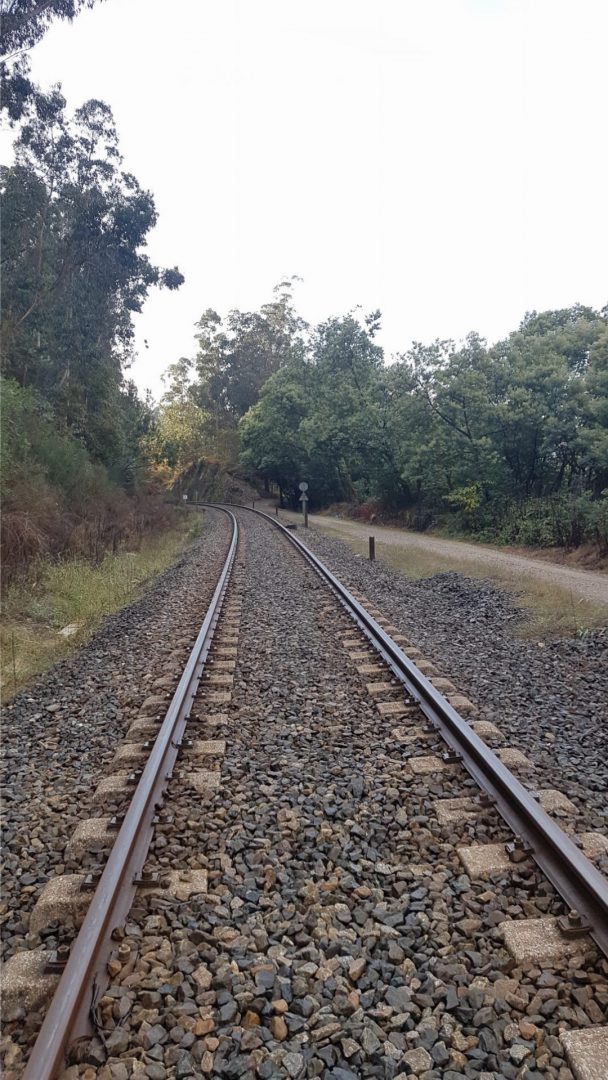 We followed the railway line for most of the day, and even had to cross over it at one point. This line goes all the way to Santiago… it’s about 30 mins on the train … 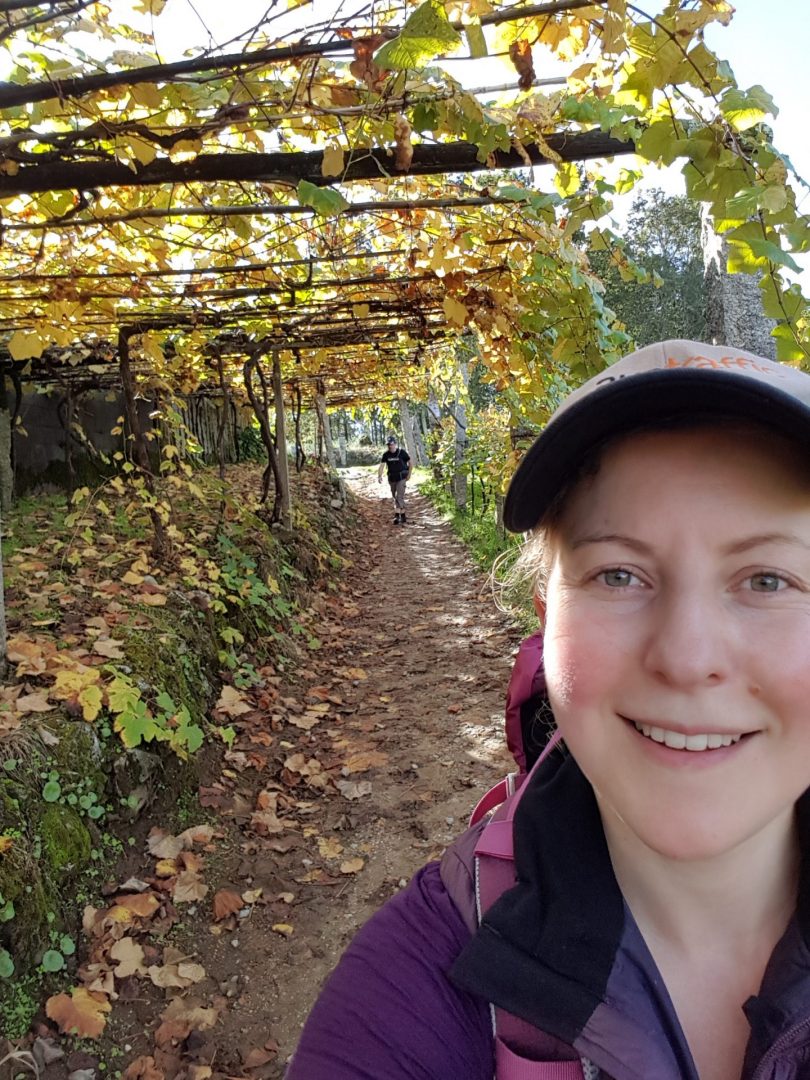 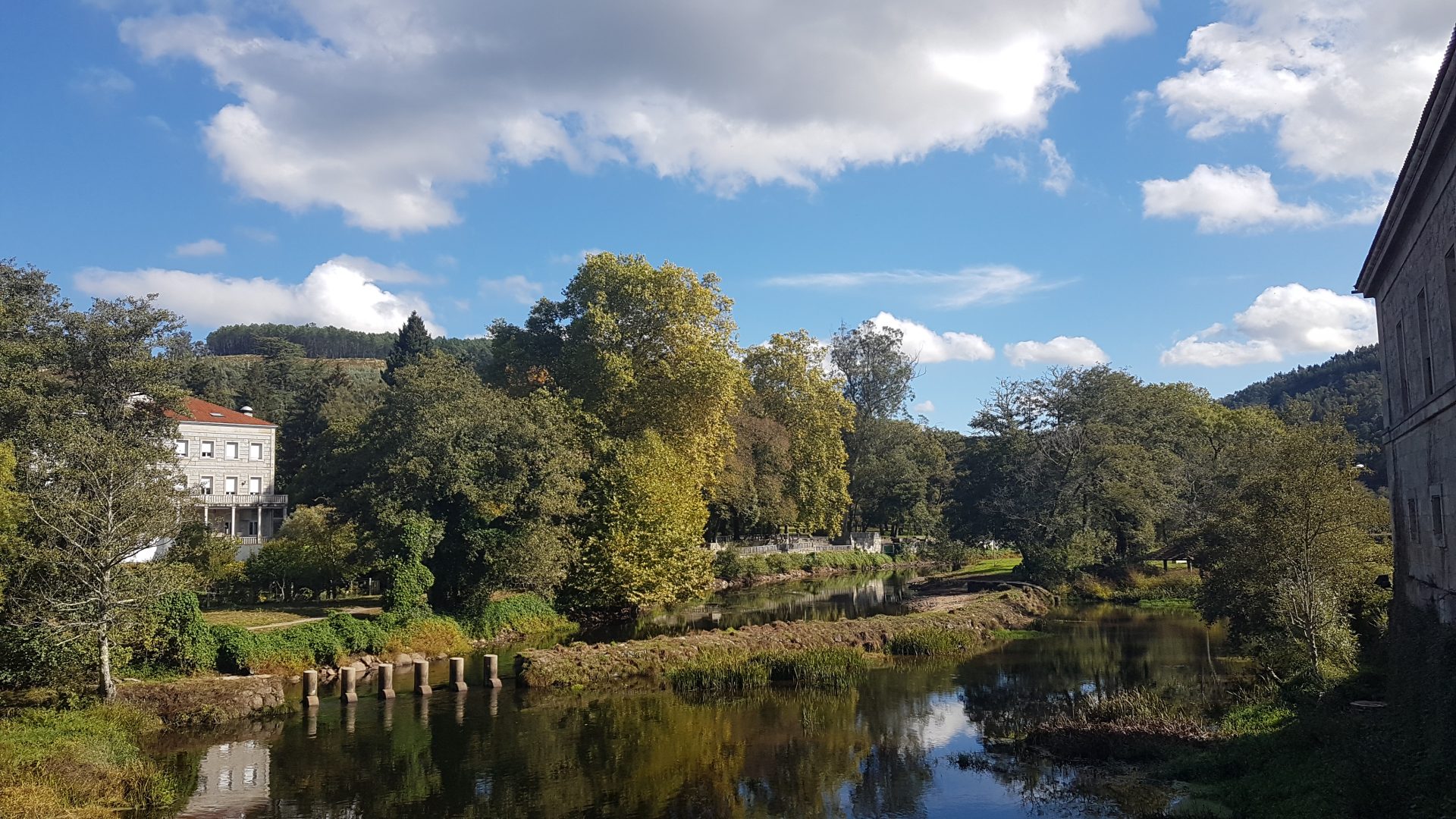 We were struggling a bit towards the end of the hike into Caldas de Reis – the last few km were on hard road surface (but thankfully not hobble stones) and somehow we’d convinced ourselves it was 2km shorter than it is, which was a bit of a disappointment when we got to the wee town before Caldas de Reis. At this point we realised we still had at least half an hour of trudging to go before we got cerveza 🙁 . Both of us are having some issues with ankle joints, but the distances at the moment are short enough to be okay. 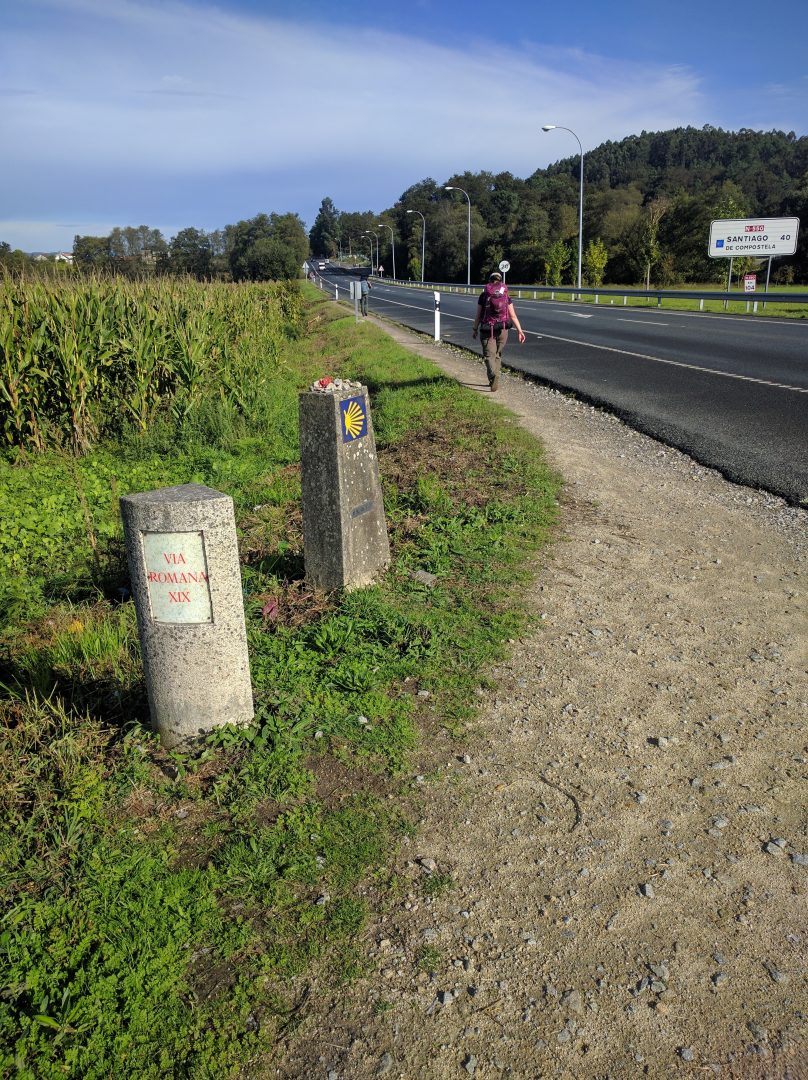 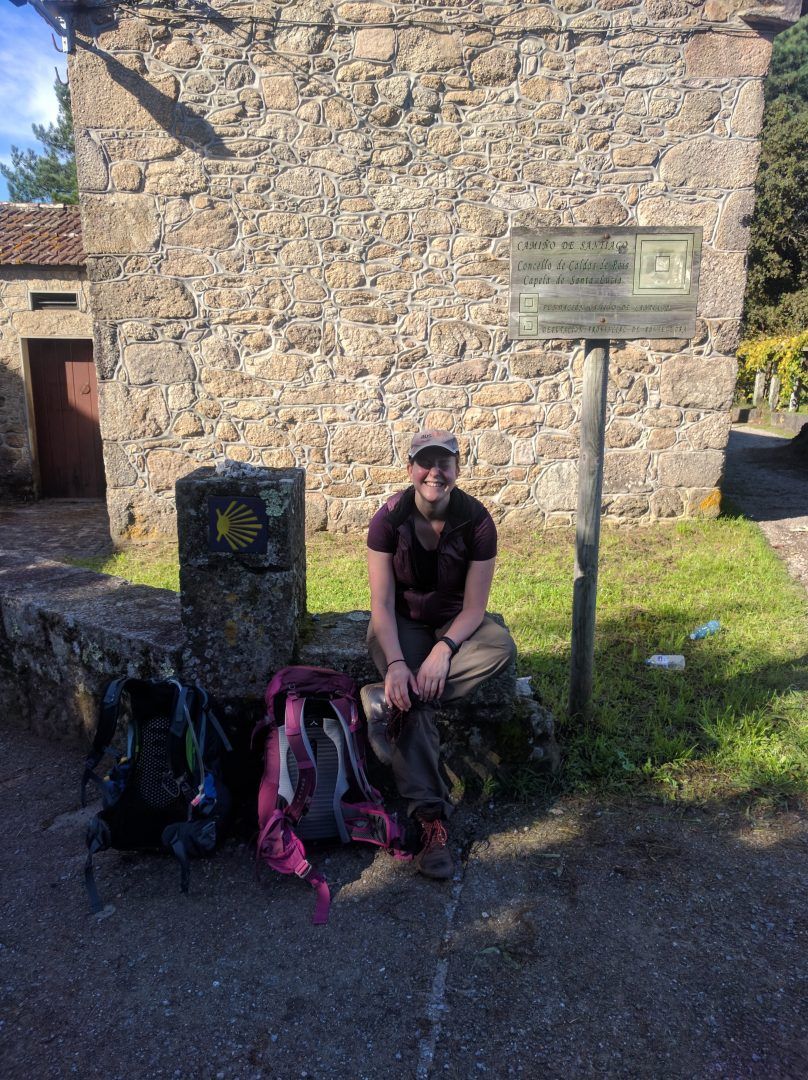 Resting outside the Chapel of Santa Lucia. I was smiling, but then I moved my foot, and the smile turned into a grimace.

Our choice of lunch venue was based purely on proximity and whether they served cold beer. The cafe we went to was A+ on those factors but lacking somewhat on other things, like lunch. Oh well. We made amends this afternoon with a decent Rioja (when in Spain …), queso and jamon from the supermarket, where I also found some Creme Catalan. If I had the energy I’d go out and find some proper stuff, but I don’t. The supermarket one has still managed to take care of our custard quota for the day 🙂 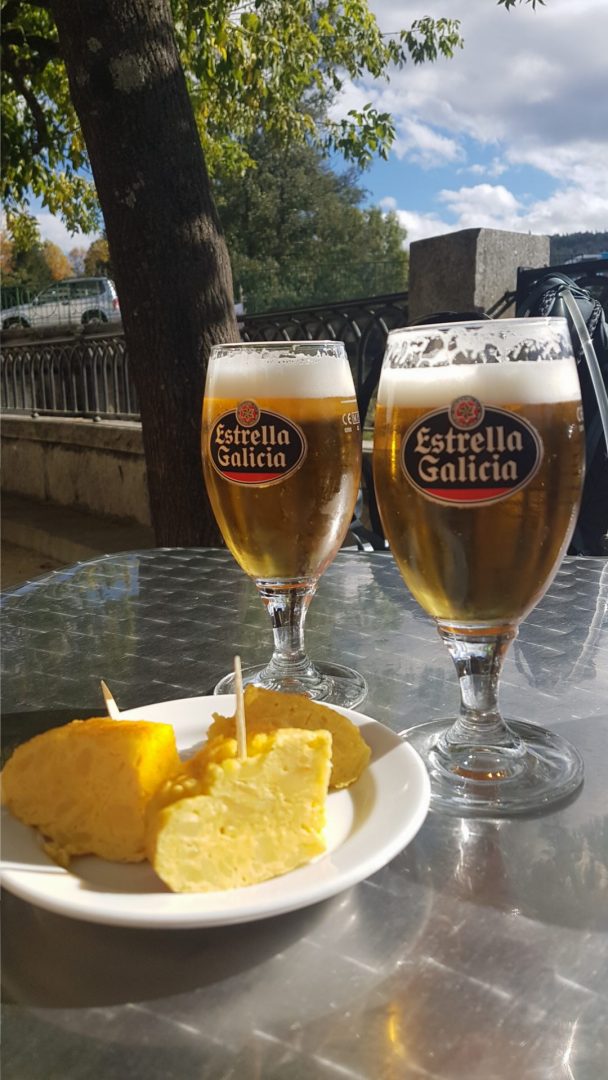 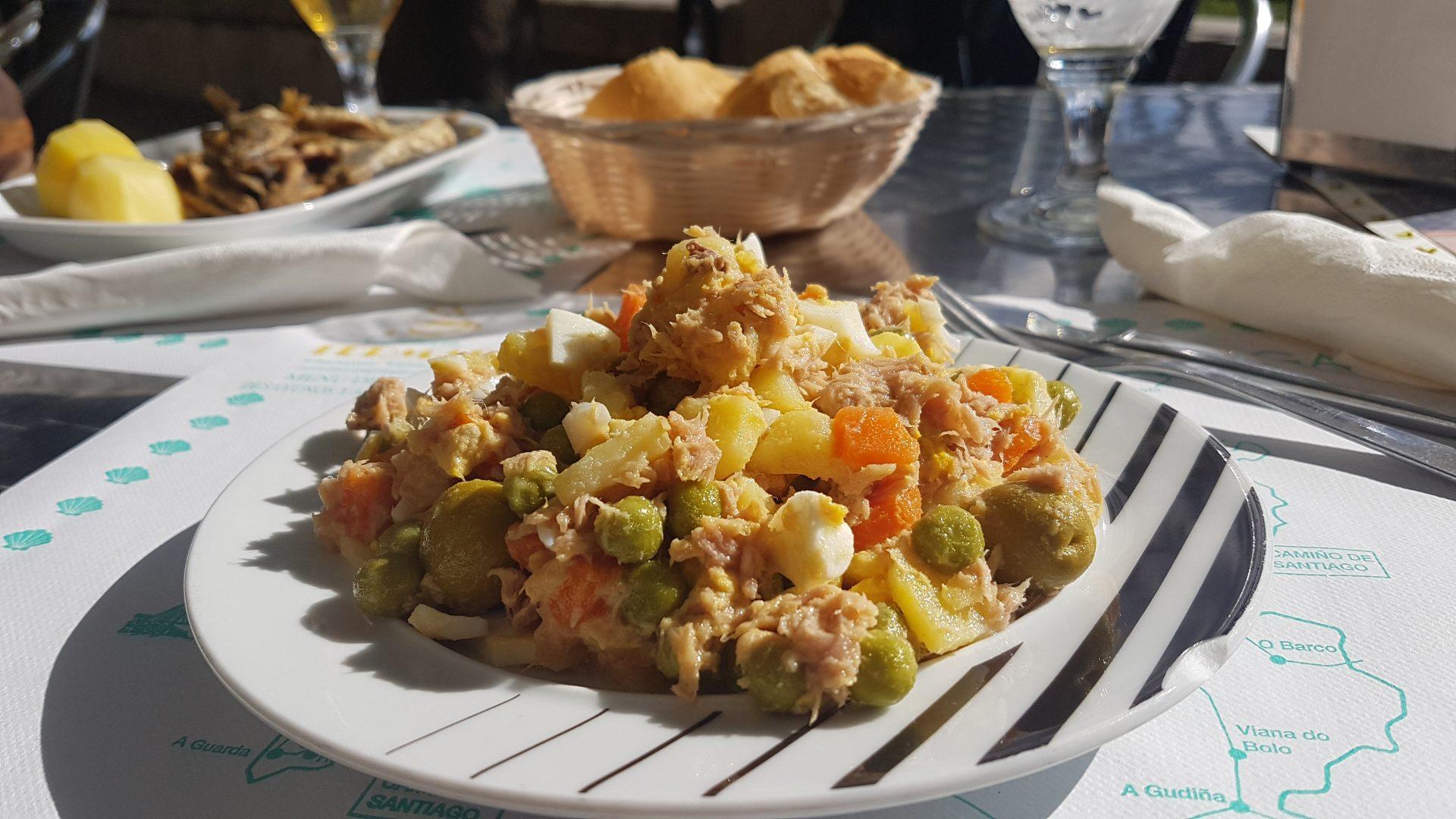 Ensaladilla. This is very common in Spain – it’s basically a tuna potato salad with peas, carrots and egg. 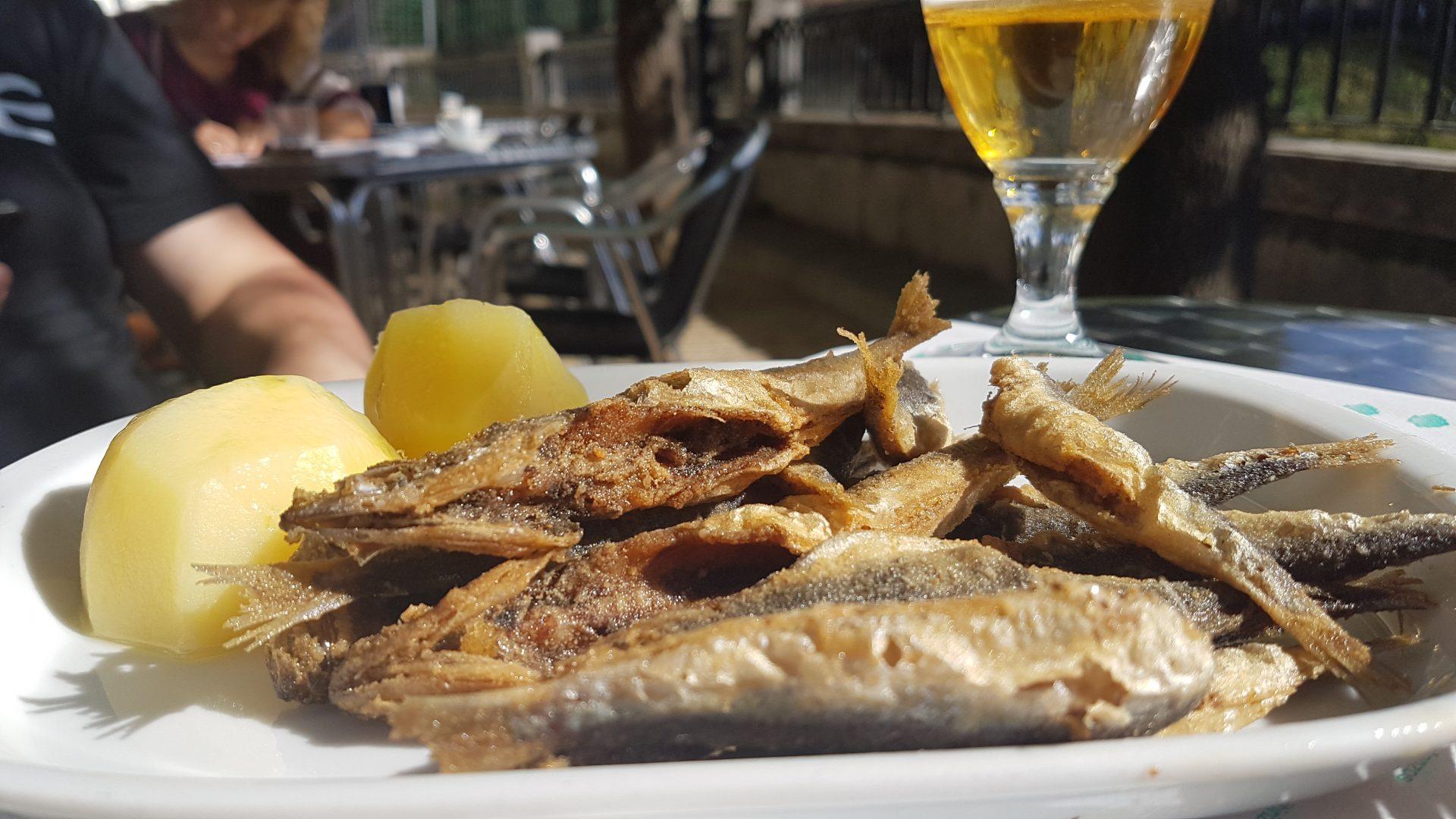 Menu del dia : Dave got the fish fritters. This is not what we were expecting at all. Tasted good though. 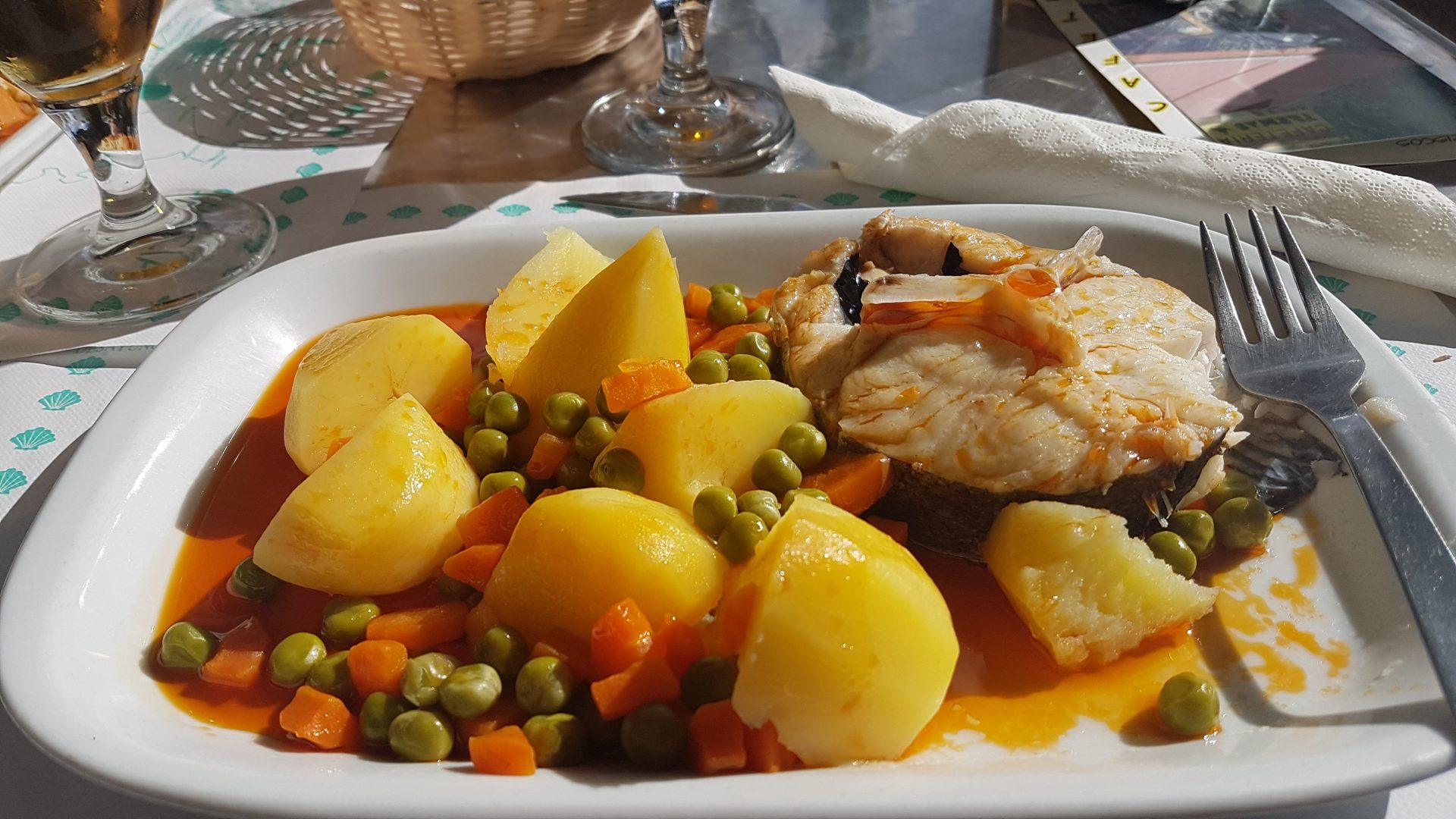 Lunch: menu del dia. Fairly sure at some point all the items on this plate did hard time in the freezer. 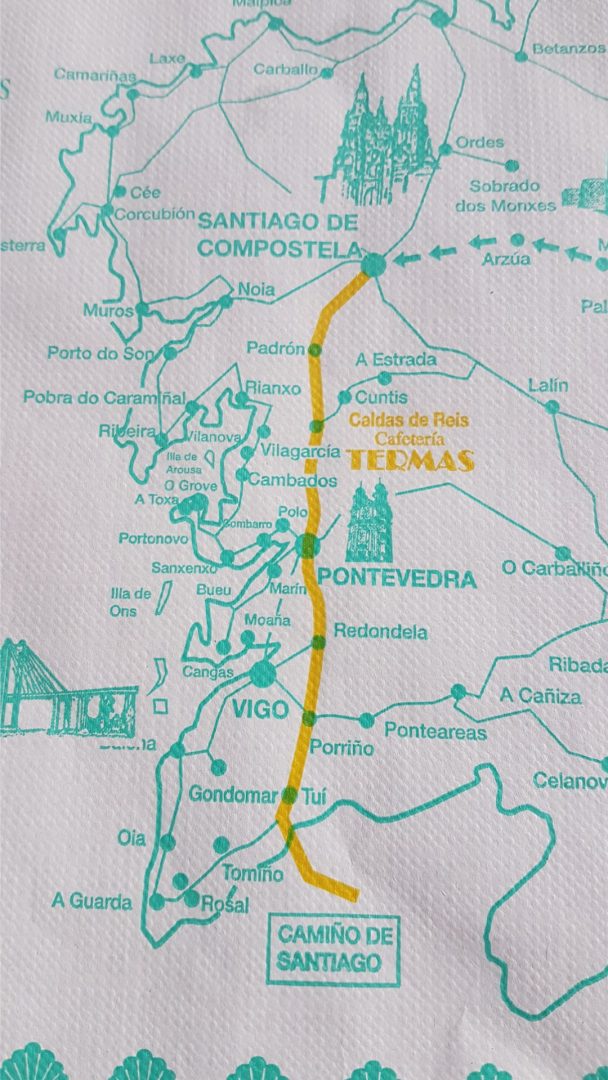 Tomorrow we’re off to Padrón, home of the superb pepper by the same name. I’m a huge fan of Pimientos de Padrón and have every intention of acquiring some while in the town they originate from. Hopefully there will also be more creme Catalan 🙂

After Padrón, we’ll be heading to Santiago! I can’t believe we’re almost there. Thank Christ for that! It’s been a blast but holy crap our feet hurt! 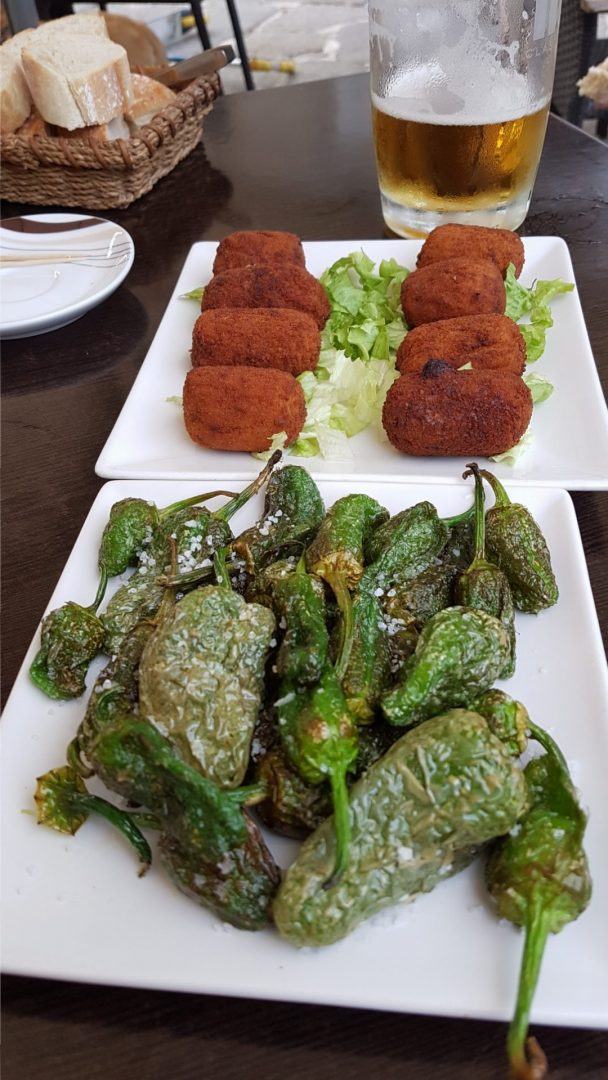 I simply adore Pimientos de Padron. These were from the other night in Pontevedre. Superb.