Camino Portuguese Day 3 was my idea of hell! My feet were hurting so badly by the end of it there were a few moments where tears were a good possibility. This post was not completed yesterday as I crawled into a ball on my bed and napped for 12 hours instead!

I have decided to rename ‘cobblestones’ to ‘hobble-stones’ as they are murder on my poor arches and ankles. Camino Portuguese Day 3 is one of the longest in the guidebook – 29.6km but this doesn’t include the extra steps for hills, and the baby steps I was taking all the way into Barcelos (some horrible person thought to cobble stone the last 8km). 🙁

We started off well enough. Overnight we stayed at the Bellamar Hostel in Vila do Conde. We were up nice and early, leaving the hostel at 7.22 am! Breakfast was ‘on the run’ as the hostel had packed us a few slices of bread and fruit. 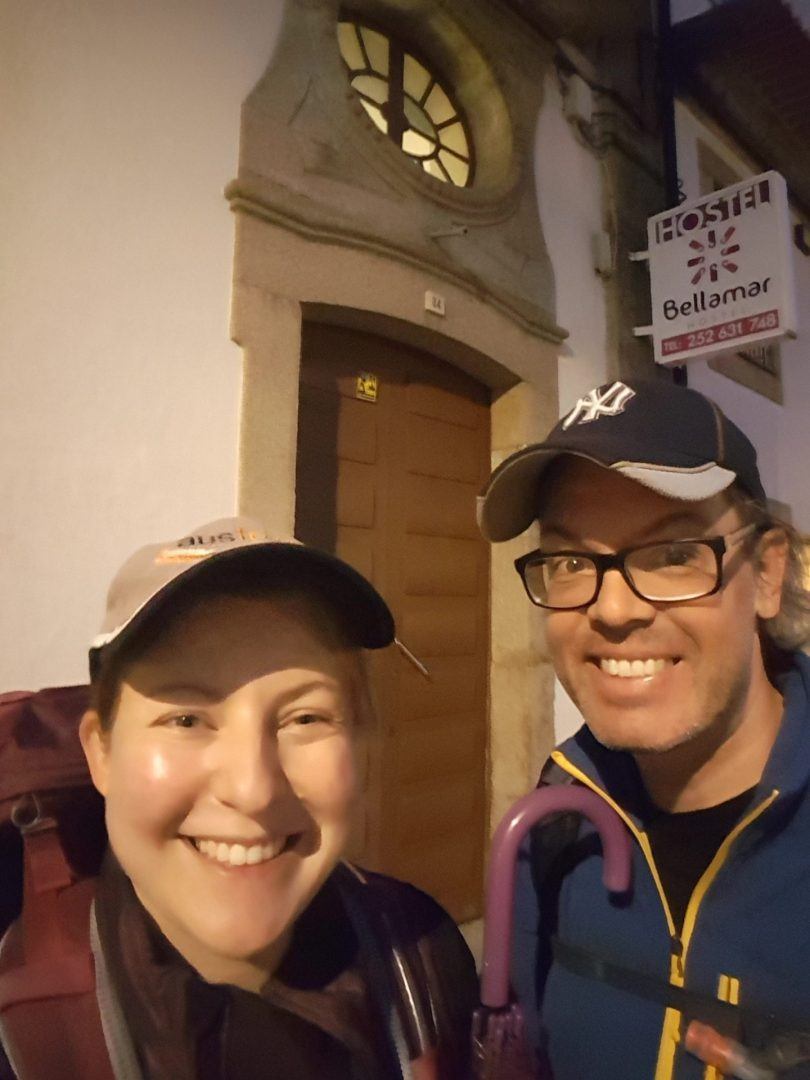 We found a nice little pastelaria (as we always do) not far from the river crossing at Rio Este.  Proper breakfast consisted of a very good Pastel de Nata.

The river crossing is over a beautiful single lane arched bridge parallel to a cascade (Cascatas de Toughuinho). 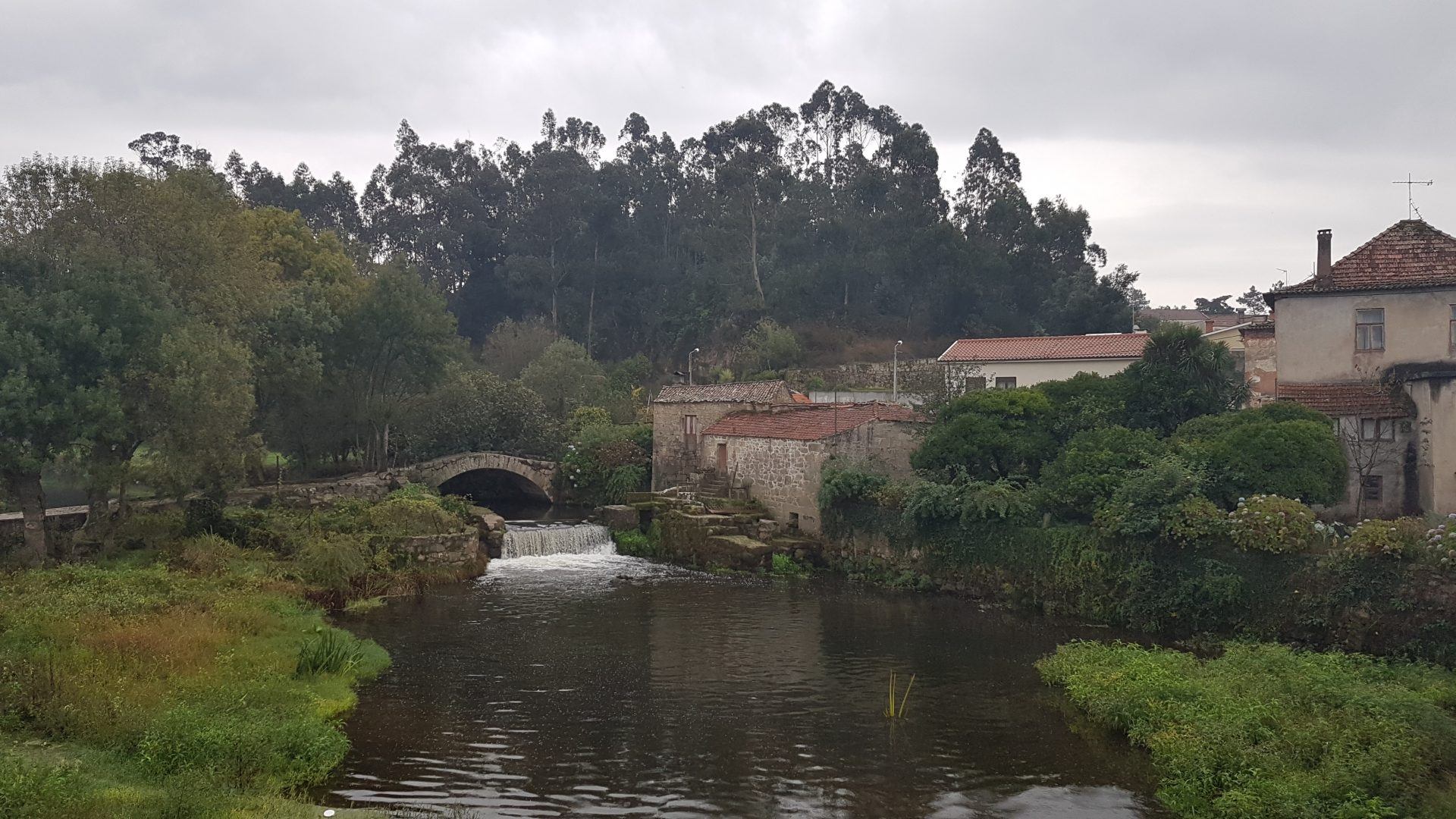 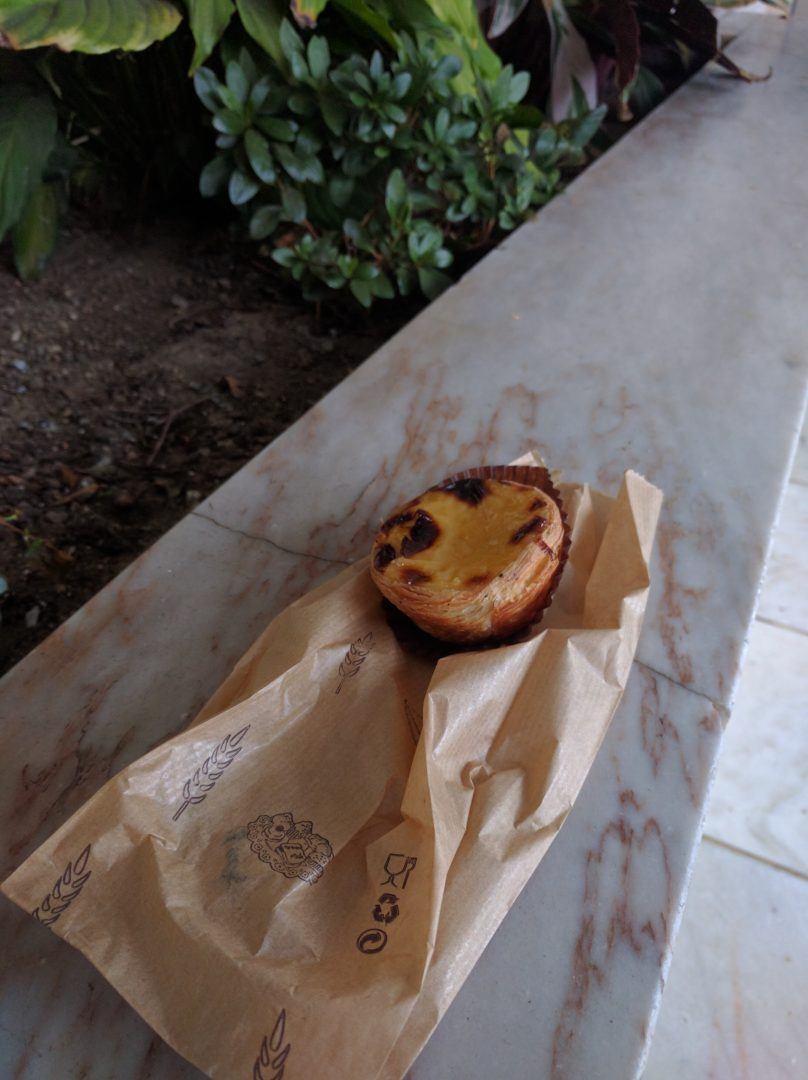 Then there was a brief morning tea at Arcos (and a vanilla slice for Dave). 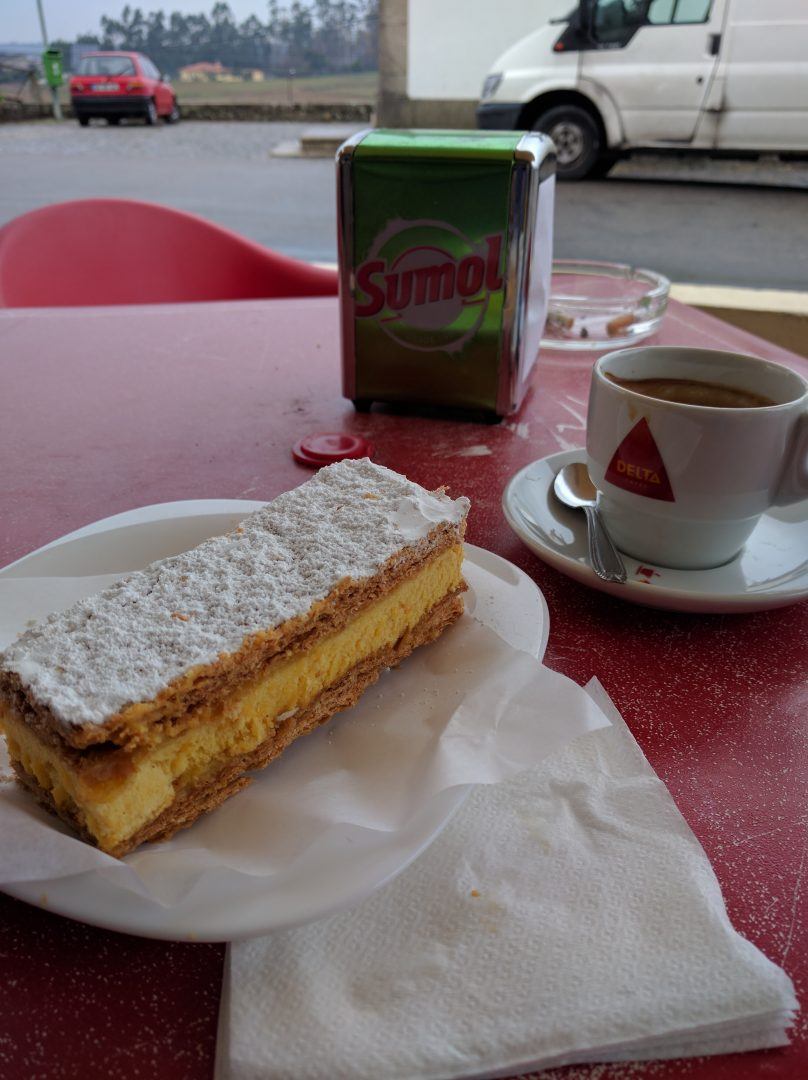 Powered by custard, we forged ahead to Rates. There are a couple of paths through Rates, and unfortunately we initially picked the ‘wrong one’ according to a local farmer. My interpretation of his Portuguese (which I don’t speak) and body language, lead me to believe that he didn’t want us walking through all the mud. Else wise, he didn’t want us walking on his land. Either way, we doubled back and made our way through the town of Rates. 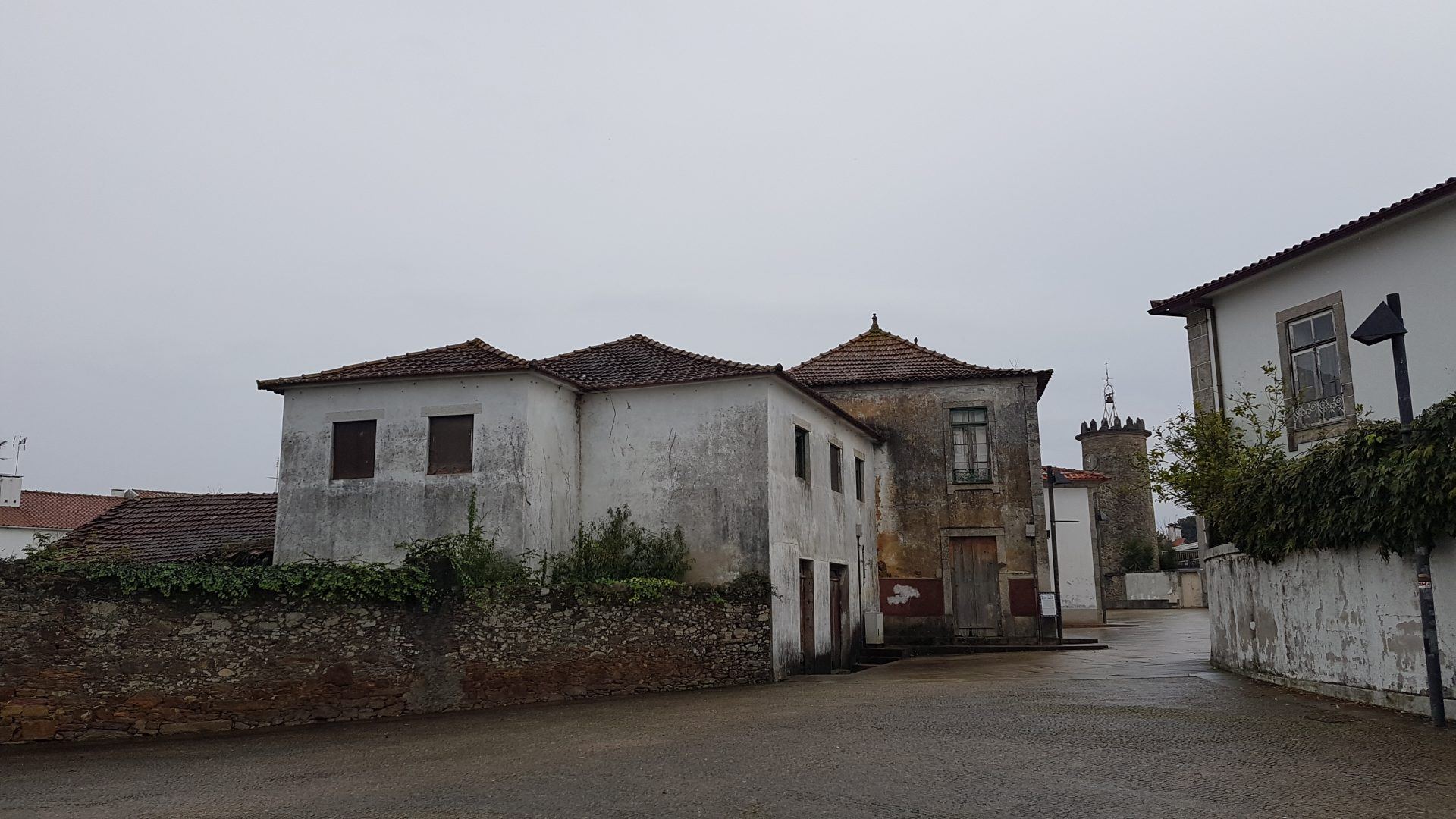 From Rates, there was a lot of walking on cobble stones. A. Lot. 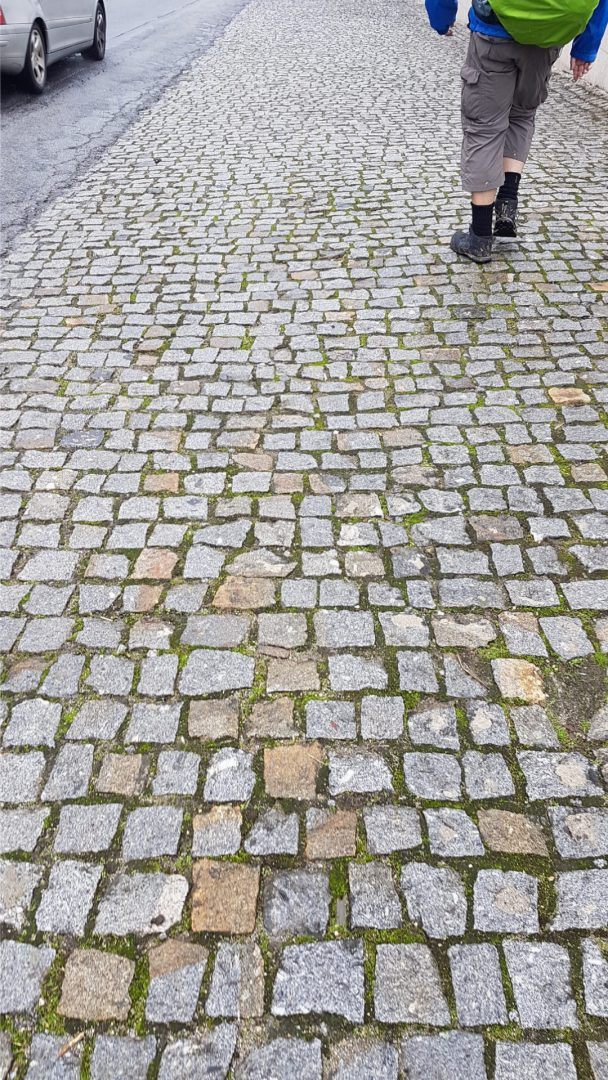 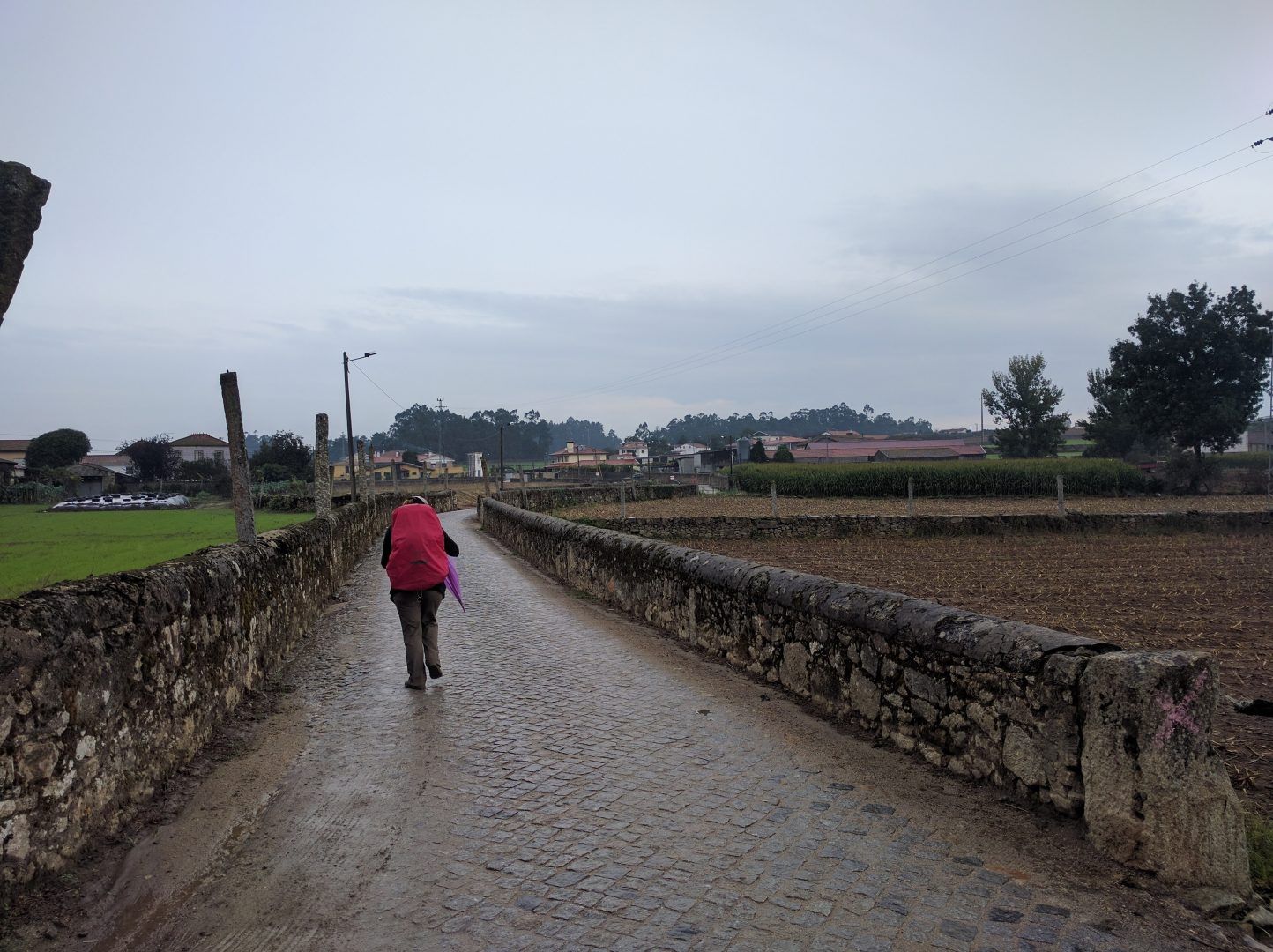 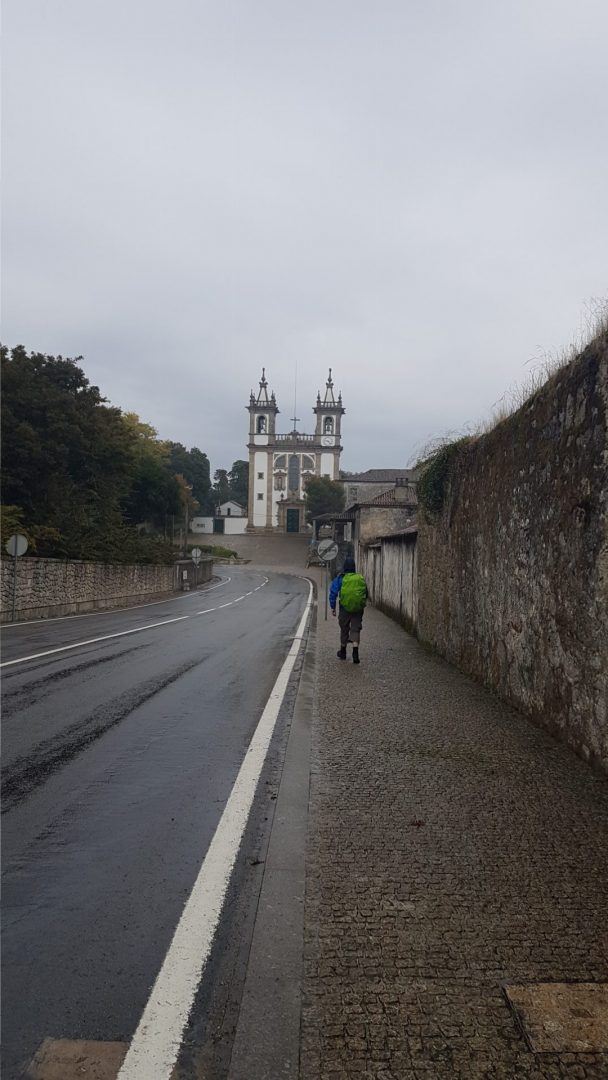 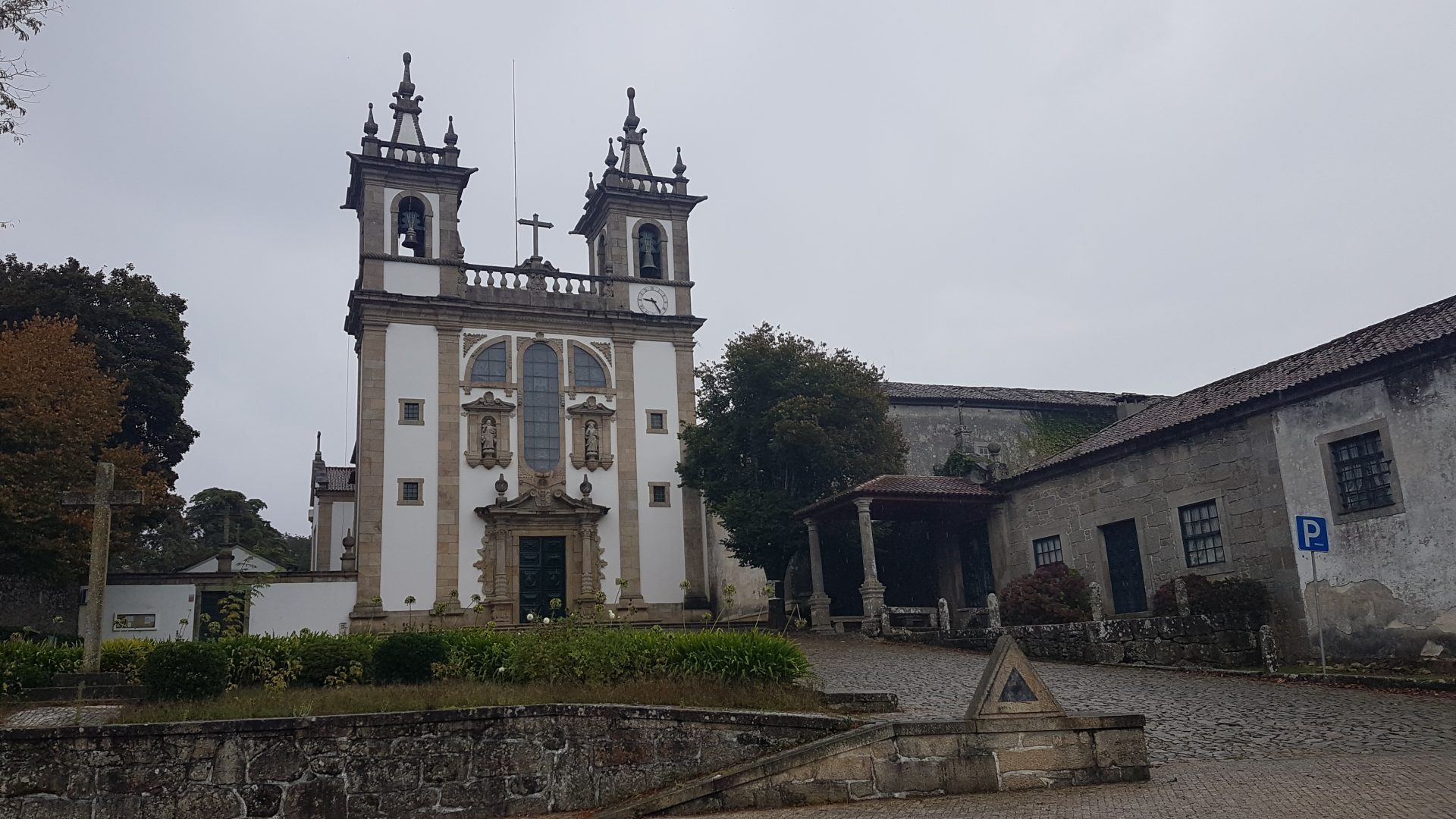 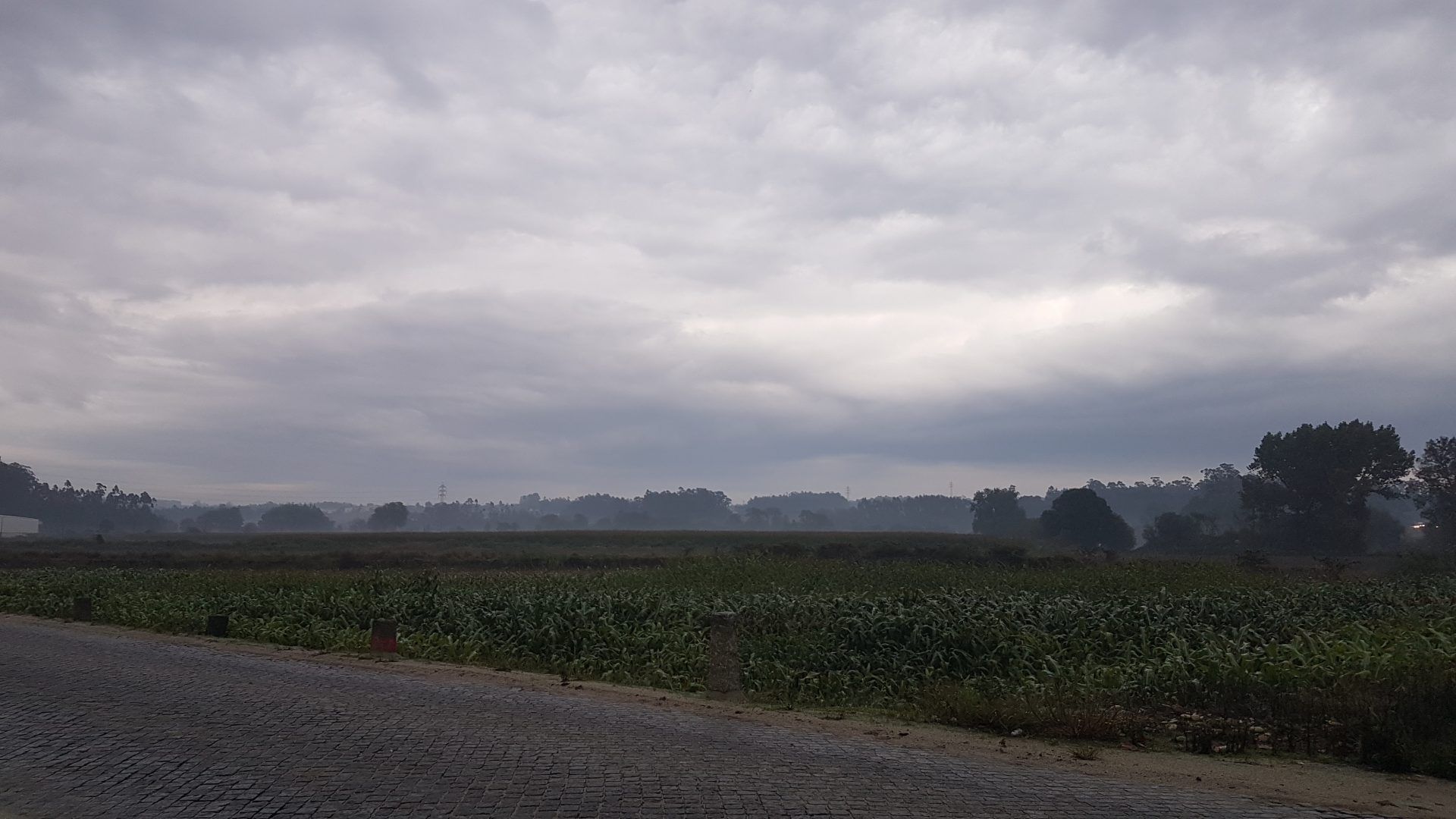 The Way is paved with cobble stones. 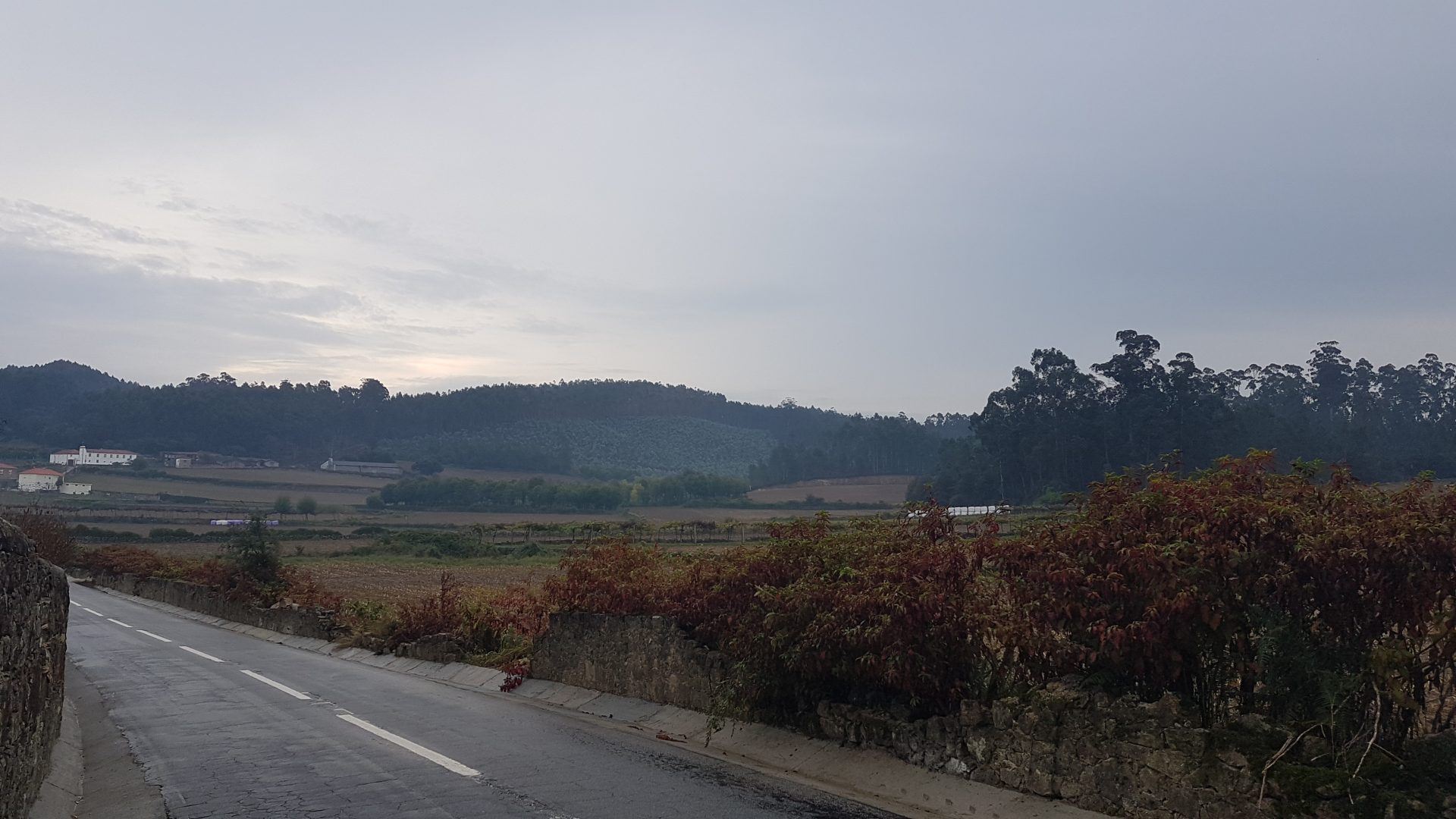 There were a few kilometers of respite in the form of dirt tracks. These are like walking on pillows compared to the granite. 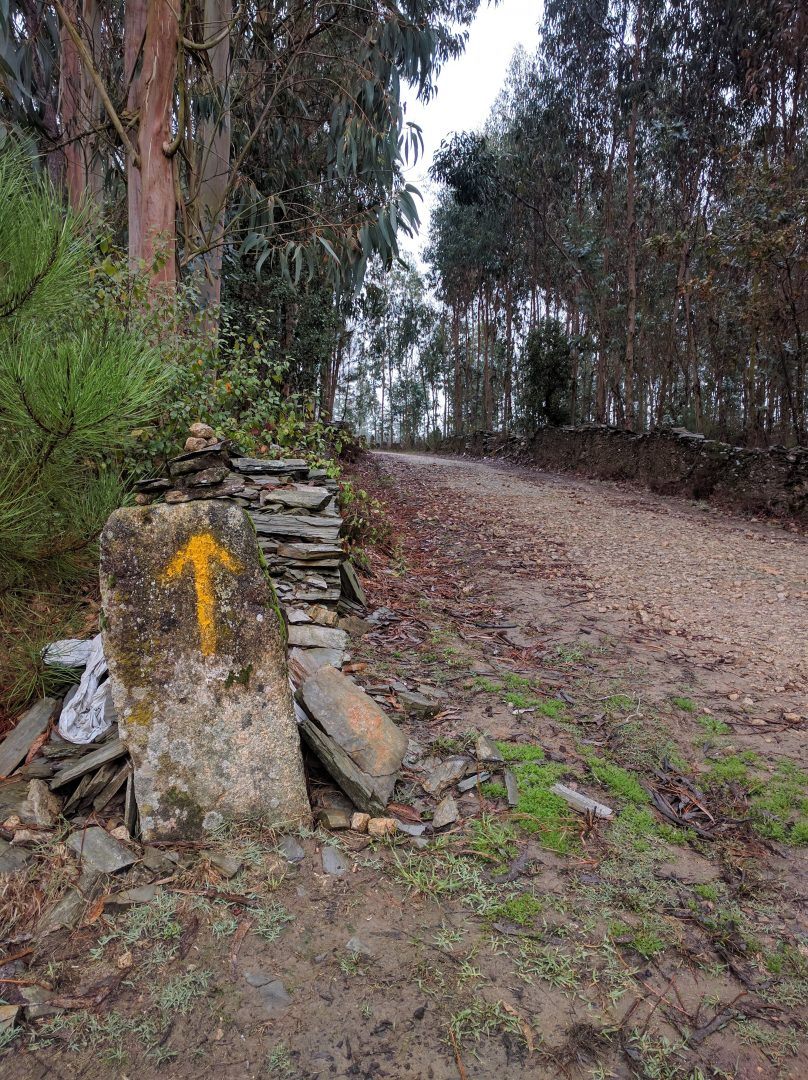 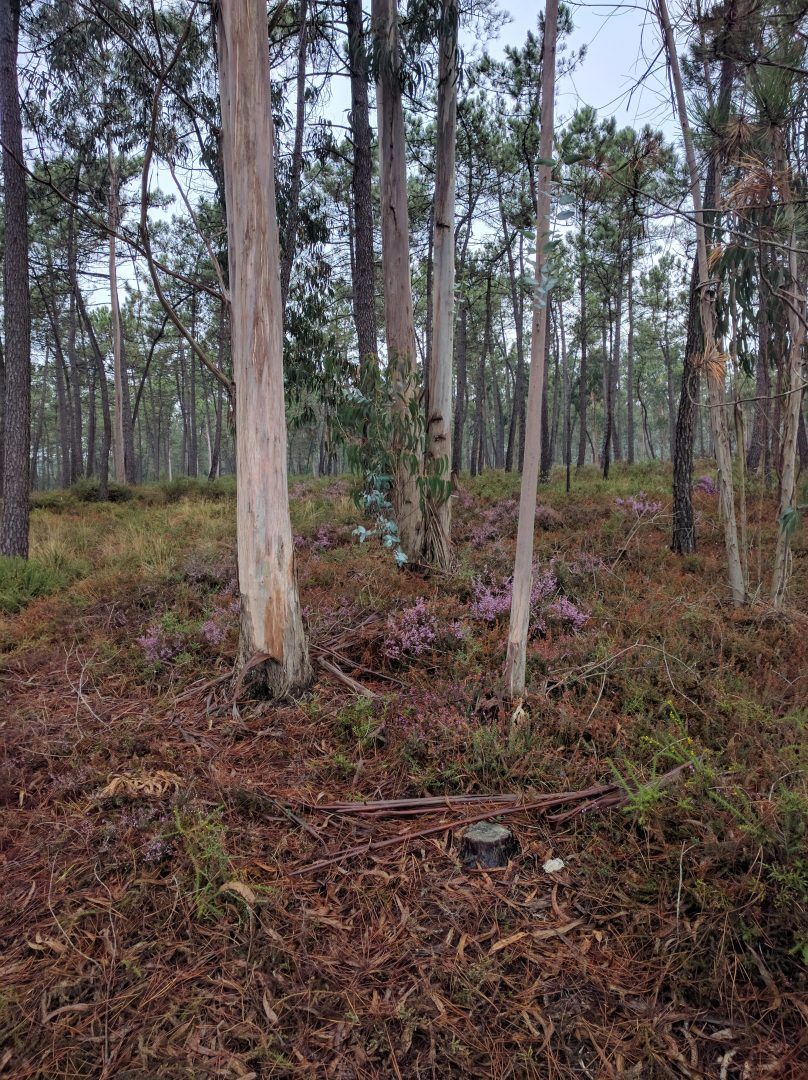 Eucalyptus and Heather, track side.